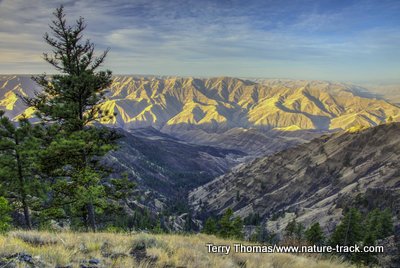 Like this view of the Snake River from Craig Mountain WMA, the scenic beauty of most of the state’s WMAs is awe inspiring. Photographers will wear themselves out trying to photograph each one.

We spent the last 16 days getting to know most of the wildlife management areas in Idaho. We learned a lot about Idaho on this trip. For example, I think I have finally learned how to spell Coeur d’Alene and Pend Oreille (pronounced Ponderay). We have found a lot of areas where it would be fun to live and have fallen in love with a couple of them. We discovered that each WMA has its charms but sometimes you have to look to find them. To our chagrin, we learned not to trust just one source of maps, even if they come from the Idaho Department of Fish and Game. We had our best luck when we used all the map resources at our disposal as no single map ever seemed to be completely up to date and electronic media was unavailable in many locations.

As for the WMAs themselves, we found them to be a remarkably diverse cross-section of Idaho habitat. A study a few years ago found that the wildlife management areas in Idaho provide habitat for about 92% of the state’s wildlife species. Not all the habitat they need by any measure, but at least something. We saw that for ourselves in the variety of habitats encompassed in the WMAs and it was astounding. From the depths of the Snake River canyon just north of Hells Canyon to the ponds of Boundary-Smith Creek, literally a stone’s throw from Canada to the winter ranges of eastern Idaho, you can find grasslands, forests, marshes, rivers, agriculture and mountains, foothills, steep canyon breaks and rolling prairies.

Through poor planning on my part, this trip turned out to be more reconnaissance than recreation. We were usually too pressed for time to really enjoy the recreational opportunities at each area, although we could see that there was plenty to do. Most WMAs have extensive hiking/biking/equestrian trails, hunting and fishing are generally allowed and some allow camping. Most are scenic enough to give photographers a workout. On more than one occasion, we found ourselves wishing we had brought the canoe as water seems to be a common theme among WMAs.

Undoubtedly, readers will be wondering which WMA was our favorite. That is a tough question, and one I asked myself repeatedly. I really found that to a large degree, my favorite was the one I was at. We enjoyed each and every one but there certainly were a few standouts such as Craig Mountain, Boundary-Smith Creek and our own Sand Creek WMAs.

It is a four-hour drive from Idaho Falls to Boise and another nine hours north from Boise to Bonners Ferry just south of the Canada line. That is certainly doable in a long day of driving. You can even shave off a few hours by driving through Montana to Coeur d’Alene. We weren’t interested in just getting from point A to point B though. We were looking for an adventure that would help us to really see Idaho, not just skip across like it was a flyover state.

We found that by focusing on a goal of seeing as many wildlife management areas as possible we tasted a great cross section of Idaho. We discovered the undusted corners, followed twisting rivers and gained a great appreciation for the state in which we live. In the process, we found that most WMAs could be a destination in themselves.

Is a reconnaissance trip for state parks or national forests or something else in the works? Maybe. However, I have about decided that I would rather spend the two weeks in a single area and sample the WMA recreation more thoroughly. After all, the purpose of this trip was to decide where to focus our attention and now we know.