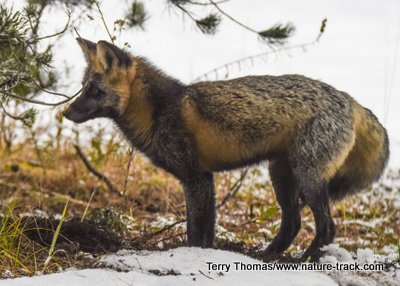 The red fox is usually a wary creature, unwilling to let humans get too close. Our experience proves that the foxes set the rules on this though and a good meal may outweigh cautiousness.

After suffering through a few computer viruses from clicking on seemingly harmless stories, I am pretty cautious about what I choose to view on the internet. I took a chance though on an email with a link to some photos of an African lioness doing something very interesting. This young lioness was gently caring for an almost newborn fawn of undetermined species.

I scrolled through a number of different images of the lioness carrying the fawn, setting it down and gently licking it and could spot no digital tomfoolery. The captions for the photo wondered if this was simply meal preparation or if this lioness was adopting the fawn. The skeptical biologist in me was leaning toward the former. Then the story continued showing photos of many other instances, with lions and with other species, where predators of many types have “adopted” prey species almost like pets or surrogate offspring.

This behavior is seemingly bizarre. There is a line of reasoning that says that animals don’t really think or have feelings and only react out of instinct. Given that, it would be hard to imagine that the mothering instinct could override the more immediate survival-bound instinct to kill and eat.

What I think it says is that in nature, animal behavior has much wider parameters than we often give credit for. My son, grandsons and I had an experience while deer hunting that seems to bear this out.

High up on a ridge near Anderson Ranch Reservoir, my grandson, Logan, made a terrific shot and killed his first deer in the final half hour of shooting light. By the time we hiked over to the deer, it was getting dark. We took a few photos and then, by flashlight, set to teaching Logan how to field dress a deer. Once the entrails were on the ground, we occupied ourselves with figuring out how to hang the deer so predators wouldn’t feast on it and we scrambled through packs to find enough rope to do the job.

While we were engaged in this endeavor, we detected movement at the pile of entrails, literally just a few feet away. Four flashlight beams converged and pinned a red fox in the glare. I thought for sure that this would frighten the fox away for good. But the fox stood its ground, snagged a piece of the fresh meat and trotted off. With all the commotion we were making, certainly that was the last we would see of that fox.

In a few minutes though, the fox was back for another piece of venison. We paused from our attempts to hang the deer and watched it in our flashlight beams from about ten feet away. Once again, it took its time to grab a piece of deer and then disappeared into the brush. Despite flashlights, camera flashes, human voices and a bucket full of human scent, this scene kept repeating itself for almost half an hour until we had the deer off the ground and were heading out.

I was amazed that this fox, normally a skittish creature, would repeatedly come within ten feet of us for the chance to score a meal. It proved to me the foolishness of trying to put animal behavior, or even nature, in a box. The more ardently we observe behavior and nature, the more common the uncommon becomes.