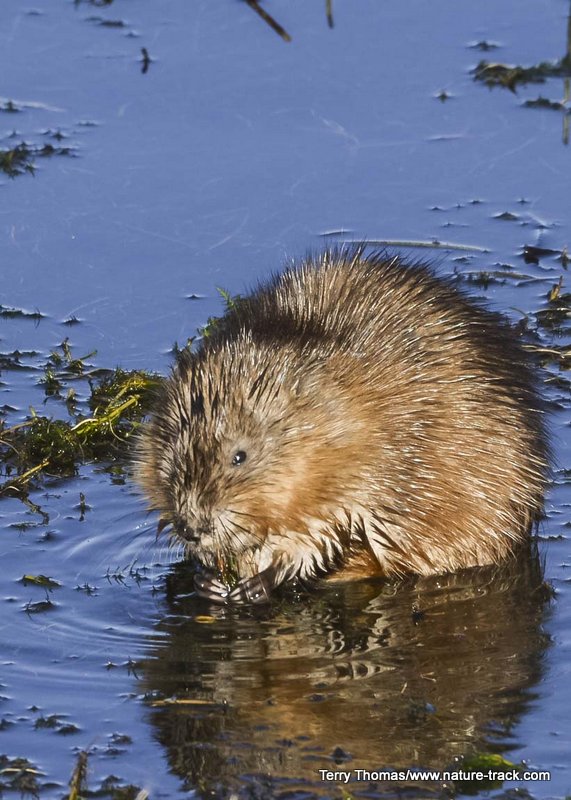 A muskrat comes to the surface to feed and to dry off at Market Lake WMA.

Driving through Yellowstone on the last day roads were open, I spotted what I thought was a bear in a muddy backwater of the Yellowstone River in Hayden Valley. We quickly pulled to the side and I pulled out my binoculars. Nope, not a bear. It was a mound, clearly intentionally formed of reeds and rushes, steep-sided and about two or three feet tall.

As water around the area has receded with autumn, lumpy mounds like these are becoming more noticeable. A reader recently asked me if the numerous mounds now visible in Swan Lake in Island Park were swan nests. Again, the answer is, Nope. They are homes or lodges for an aquatic rodent known as the common muskrat, Ondatra zibethicus.

Not all mounds in the marsh are lodges, however. Muskrats also build feeding huts, mounds seldom more than a foot tall. These are secure covered areas to feed under and to dry off but they are not used for residence. Not unexpectedly, there may be 2-3 times as many feeding huts as lodges.

Despite all the lodges visible this time of year, it appears that muskrats prefer bank dens over lodges when steep banks are available. These dens usually have an underwater entrance which accesses a network of tunnels that may be 100 yards long. Inside, the muskrats excavate multiple nesting chambers. Bank dens tend to be safer as most predators, (their main predator, the mink, being an exception) cannot access them.

This preference for bank denning often gets muskrats in trouble. Their hole digging can undermine dams, dikes, irrigation canals and farm ponds making them under appreciated by those tasked with repairs.

Muskrats are medium-sized mammals, adults seldom exceeding 24-inches tip to tip, so how come they can have such a profound impact on their habitat? In a word, numbers. Muskrats are prolific breeders. A typical northern female has an average of 2.5 litters a season with up to ten kits per litter although the average is five or six. A female born in spring may be raising her own litter by season’s end. The average female will raise 12-15 kits a year but one female was documented raising 46.

Muskrats spend a lot of time in the water throughout the year and have developed several adaptations to aquatic life. For instance, they have a beautiful thick pelt for warmth.  They also have a long scaly tail flattened horizontally that they use primarily as a rudder. Their back feet are large and are used for propulsion, kicking one foot back at a time. Front feet are held out of the way. Under water, muskrats can hold their breath for up to 12 minutes and there are folds of skin behind the incisors that allow muskrats to chew off vegetation below the surface without getting a mouthful of water.

If you have a chance to drive by Swan Lake, take a minute to stop and appreciate the muskrats that live there. Count the lodges you see and multiply by five to get a rough estimate of the population. Then thank them as they may be one of the reasons that this little lake can still provide habitat for the trumpeter swans that nest there each spring.