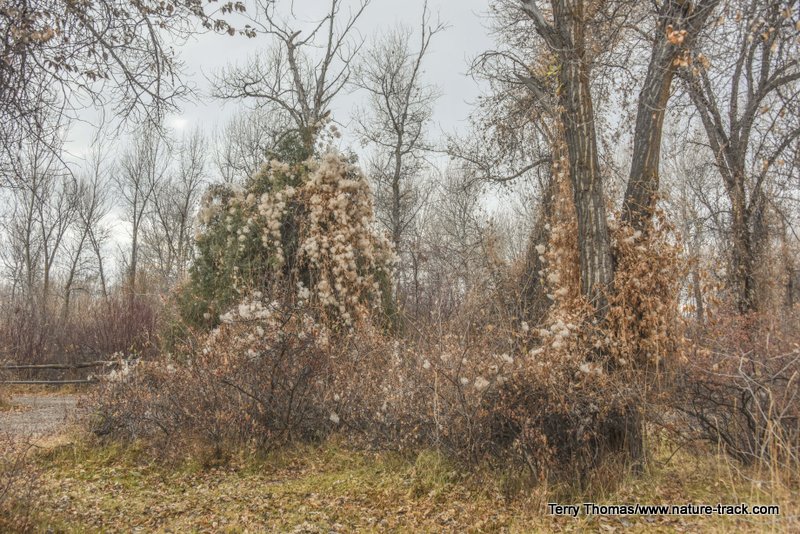 Western white clematis along the South Fork grows fast and can completely cover smaller trees and shrubs. It is easy to see during the fall when leaves are gone and the seedheads are prominent.

We have been camped at Twin Bridges near Ririe for the past week enjoying the last days before the snow falls. As we walked around the campground, it has been easy to see one of our common native plants, clematis. This vine grows well in riparian corridors such as the South Fork of the Snake River where it has plenty of trees to climb.

I have seen both types of native clematis on the South Fork and surrounding area. One is called blue clematis and the other, Western white clematis. They are also known as white virginsbower and western blue virginsbower.

The color, of course, refers to the flower. Neither species’ flower has petals, but both sport four showy sepals. Blue clematis flowers are much larger and showier than Western white clematis flowers and both species bloom from late spring to August.

When I see the extent to which clematis vines, especially Western white clematis, can engulf a large cottonwood, the first thing to mind is, does that damage the tree? While the vine stems themselves aren’t large, there are lots of them and since they can climb 50 feet or more, they may completely cover smaller trees in a dense weave of vines.

Trees do have a troubled association with vines. Some of the larger vines, such as the strangler fig and Oriental bittersweet, wrap tightly around the trunks of trees, almost becoming a part of them. Like a tree trunk, the vines continue to add to their girth, sometimes reaching over six inches in diameter. These are the botanical equivalent of pythons, boas and other constricting snakes, and eventually choke the tree, robbing it of nutrients and can kill even large trees.

This isn’t the case with clematis. While it is a perennial plant with woody stems, it doesn’t form the thick stems of some other vines. It also doesn’t twine around the trees but rather, grows straight up.

The sheer mass of a clematis can be a problem though. Over time, clematis vines add a lot of weight to the trees and can break branches. A full blanket of clematis also acts like a sail, catching the wind and increasing the likelihood that the tree will succumb to a storm.

Finally, with smaller trees that are completely overwhelmed by clematis, photosynthesis can be dramatically hampered, weakening the tree.

On the positive side, these dense tangled mats of clematis create excellent wildlife habitat, offering birds and small mammals protection from predators and the elements.

Clematis vines are commonplace in landscape nurseries. Tame varieties are beautiful and often command top dollar. The ones I planted in my yard never became unruly and provided a profusion of blooms. They like partial to full sun but also like to keep their feet cool, so if you plant them, be sure to mulch heavily around the base.

One great thing about native clematis is that they add what landscapers call “winter interest”, that is, something to add spark to the monochromes of winter. In the fall and early winter, the seed clusters are easy to spot. The small seeds each have a feathery style up to several inches long and together, they look like clumps of goose down and when backlit, glow with the hope of tomorrow.