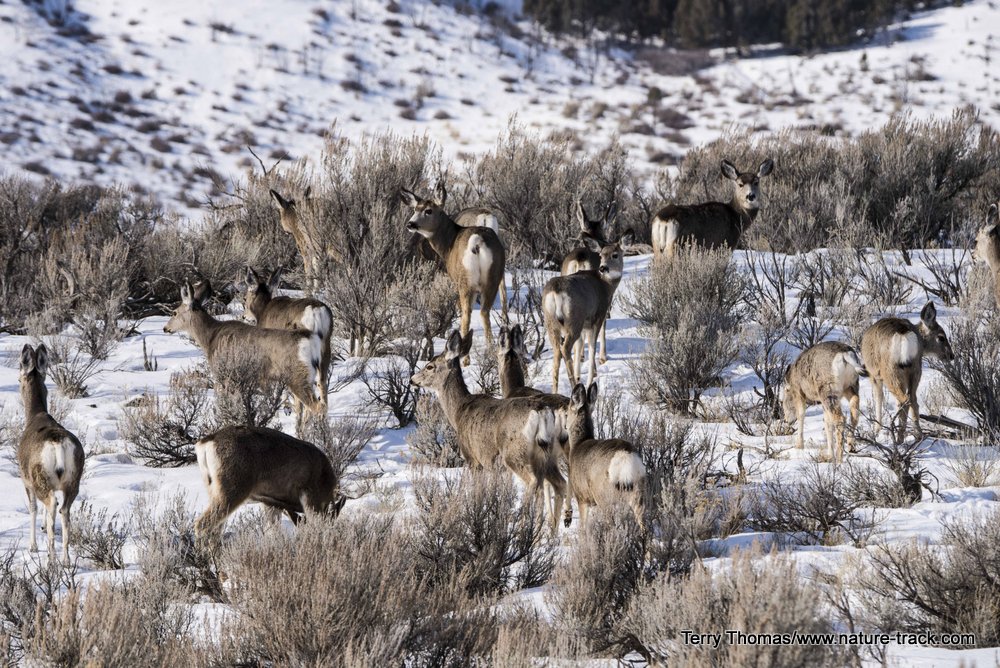 Before long, mule deer will begin migration to winter ranges. This isn’t haphazard. They typically use specific routes to get from summer to winter homes and back.

Many years ago, when I was radio-tracking mule deer in Eastern Idaho as part of my university studies, an early October storm, similar to the one we have just experienced, dumped about a foot of snow on the summer ranges. Over the next week, all of the marked deer vacated the higher elevations and started on their migratory paths. Thick muddy trails cut through the snow indicated that the radio-collared deer were not the only ones to move. Within short order, the mountains were empty of mule deer and the lower country seemed like a hunter’s paradise.

Once the storm moderated though, most of the marked deer stopped migration, waiting instead for weather to encourage them to move on to winter range. This way, they could continue to take advantage of forage that would soon be unavailable, saving winter range forage for the tough times ahead.

What has been fascinating to witness over the years as more animals have been marked, is that the animals have definite migration corridors. A corridor is a reasonably wide swath as opposed to a trail or a path that might conjure up visions of a single track. It is often a ridgeline or a canyon or some other geologic feature or combination thereof. Within a corridor, animals may wander to take advantage of new resources or avoid obstacles and developments. A corridor may be several miles wide. Interestingly, within the corridor, individual deer often used exact places, say a grove of aspens, year after year, demonstrating a high fidelity to their own route. Corridors were often used during both spring and fall migrations.

Elk do the same thing. When winter weather (research shows that it takes about 17 inches of snow) forces them to move off summer ranges, they have a definite location or winter range that they are headed to and they have a specific way to get to it.

A question arises; what happens when a single storm drops several feet or more? Can animals become trapped? Certainly, a major snow dump can prevent them from crossing a major pass on their corridor. For instance, a doe mule deer radiomarked at Sand Creek was found summering on the west side of Jackson Lake in Grand Teton National Park. It is certainly conceivable that an early storm could force her to find winter range elsewhere. She might hook up with other deer that make the long journey to Wyoming’s Red Desert or perhaps she will find her way to the feed ground at the National Elk Refuge north of Jackson.

Bucks tend to be less traditional than does. They may change winter or summer ranges, especially when they are younger. They are less likely to hang with momma and more likely to seek the company of other males, following them to new home ranges.

One thing is sure. The more radio-tracking collars are placed on more animals, the better biologists understand animal movements. There are usually plenty of surprises when animals move unexpected directions. For example, the mule deer wintering at Tex Creek east of Idaho Falls typically head south and east in the spring time. However, research that repeated my own work with more and better equipment found that a small contingent actually goes northeast, crossing the Snake River near Clark Hill. Without the collars, this movement would have never been detected and management could suffer for it.