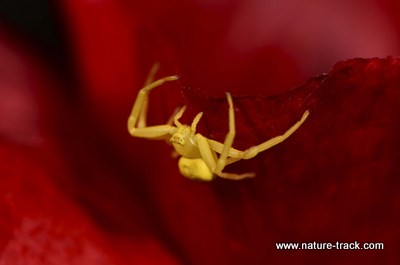 I enjoy watching insects and spiders like this beautiful crab spider, and other invertebrates in my yard. But they cross the line when they invade my home in great numbers.

When a huge spider scurried from the couch to the television, it alerted me that perhaps there might be other spiders in the house. This one was menacingly large and resembled the nasty hobo spider and I decided to check for other invaders.

I could have just had the house “bombed” for spiders.  Two of my kids had summer jobs in the Southeast selling pest control services where fumigating for invertebrate house guests is big business. However, I am squeamish about using chemicals inside my residence and I wasn’t even sure it was a problem.

I decided to do a test and see just how many spiders I could catch.  I put out a single glue trap at first. When that one started catching spiders and millipedes the very day I put it out, I added to my trapline. Soon I had about a dozen scattered through the house.

I was stunned by my success. My home is only 15 years old and I would have expected it to be more critter resistant. However, it would appear that we sleep with the doors wide open and without screens on the windows.

In the course of a year, I caught hundreds of critters. Besides spiders ranging from pinhead sized to behemoths with a legspan that would lap over a quarter (I did think about the irony of spiders getting caught in sticky traps), there were half dozen species of beetles, ants, millipedes, pillbugs, flies, moths and even a mosquito.

Strangely, there were no harvestman spiders (daddy longlegs). As common as these are in my yard, I would have expected to at least pick up the occasional one on a glue trap. One trap did have mouse hair though, indicating that while I have won the war with the mice, there will always be guerrilla fighters that routinely test my defenses.

I understand that having a few house spiders around can actually reduce the number of other invaders. However, judging by what I caught, I have more than a few spiders and frankly, I can’t tell if they are hobos or the generic house spider, of which there are numerous species. But with grandkids crawling through the house and an expected houseful of guests at Thanksgiving, I am afraid it is a case of guilt by association. They have exceeded my tolerance threshold, whether hobo or house spider.

To set my traps, I cut the cardboard back to the glue on one long edge. This is challenging because that glue is the stickiest stuff I have ever seen and will quickly gum up a blade. Bugs and spiders like to travel along walls, so I place the trimmed edge up against a wall somewhere where kids and pets won’t find it.

Fall is the time when the invasion cranks up as little critters try to share our warm dry homes. I regret having to go to war with creatures that just want to live. But I have to draw the line when they cross the threshold of my home. 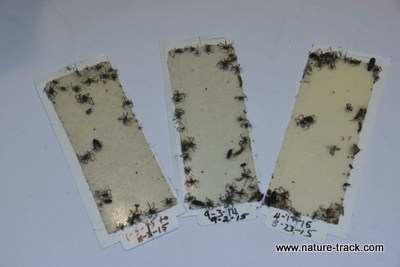 These three glueboards came from different locations in one room in my basement. In place from eight months to a year, they caught almost 200 invertebrates.