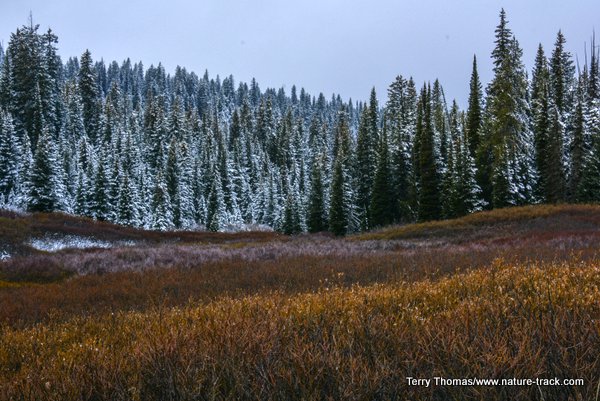 The transition between fall and winter is usually a process, marked by a give and take as the seasons vie for dominance.

I sat on my heels studying the tracks in the snow. It was two days after Thanksgiving and I was preparing for my last afternoon of elk hunting. The snow had suffered the ravages of warm weather and even rain, but the tracks and the gait still looked like those of a bear, but I couldn’t determine whether is was a grizzly or black bear. I had expected that the bears would be in their dens by now and had to rummage around in my truck for a can of bear spray.

The tracks reminded me that as I write this, we are still in a transition. Winter isn’t fully upon us but autumn’s charms have receded to distant memories. It is a time when bone chilling nights are followed by uncertain days. They are blustery or calm, frigid to balmy, often within the same day. The highest peaks won’t be snow free until next summer, but on the lower slopes and valleys, it’s a tug-o-war. Snow may accumulate for several days and then melt and settle, even on north slopes, just as quickly. Two weeks ago, the snow on top of my elk hill was almost a foot deep, fresh and white and soft. Today it is half that, a stiff crunchy stuff that advertises my every footstep. And this despite half a dozen storms in the intervening 14 days.

With the cold, ice has stilled the waters on shallow ponds and marshes, but the waves of larger lakes still lap the shores. It will just take a few cold days for the lakes to freeze but the faster water of hard charging rivers will stay ice-free and some waterfowl will take advantage of the open water all winter.

Each day the rope of time reels in a tiny bit more daylight as the northern axis of the earth continues to tilt away from the sun. It slices off just a minute or two daily until by autumn’s close, we will have only 8 hours and 50 minutes between sunrise and sunset to get our daylight business done. The sun’s southward slide won’t end until December 21st with the official beginning of winter, but by then, the change in season will be apparent.

Despite the ephemeral snow, I deduced that elk have left the hill I hunt. Tracks are all old and heading in the same direction. They are on their way to Wall Creek, Montana for the winter.  Winter has already arrived on Yellowstone’s Pitchstone Plateau and elk are heading toward winter ranges in Wyoming, Idaho and Montana, intent on getting across the passes before the snows plug them.

Most of our migratory birds left long ago for southern homes. Northern cousins have taken their place. Many new birds stop over for just a few days. Others, though, stay the winter, considering our world to be a Caribbean vacation compared to their arctic homes. There are also the birds such as the Clark’s nutcracker who, like us, stay through the winter.

In this between season, I can look back on a wonderful summer and fall, and look forward to the renewal winter brings. I know that the final long step into winter could happen any day. It might come with a single storm or a series of cold clear days that ice the lakes and ensures that the snow stays until spring. However and whenever it comes, it will be welcome, as change always is.