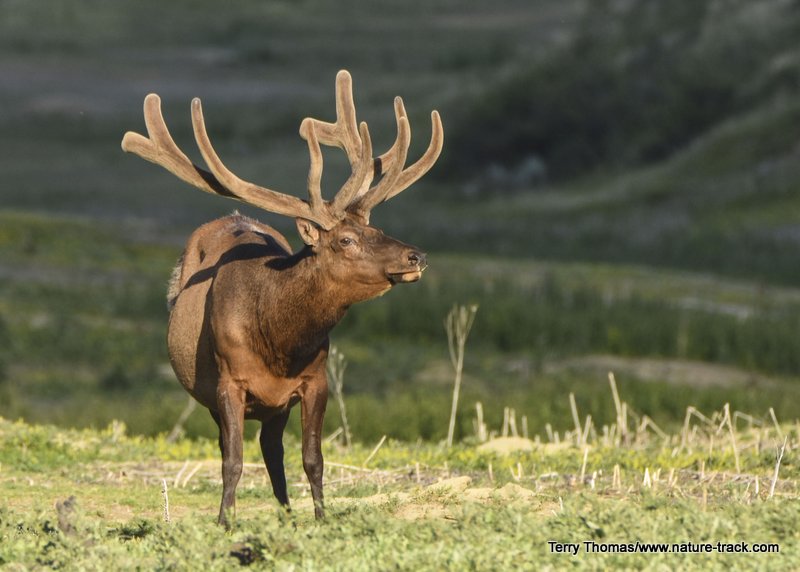 This bull elk has just developed his summer coat. His velvet antlers show promise of becoming a huge set by fall.

I will never forget the woman at Mammoth Hot Springs in Yellowstone National Park who matter-of-factly explained to her children that the mule deer they were seeing on the lawn in front of the visitor center would grow up to be elk. Elk. Deer. Two different species. Deer will NEVER morph into elk.

Elk are large mammals. While a cow may tip the scales at 500 pounds, a Rocky Mountain subspecies bull will average 700 pounds, be five feet at the shoulder and eight feet from nose to tail. In my conservation officer days, I once checked a bull in a locker with a hanging weight that nearly reached that average, making him closer to 900 pounds on the hoof. Even newborn calves are surprisingly large at about 35 pounds.

Elk are members of the Cervidae family. On this continent they count white-tailed and mule deer, caribou and moose as their closest relatives. However, worldwide, there are 43-55 member species of this family (subject to taxonomic debate, of course).

Unlike deer and moose, elk are grazers. In the wintertime they may browse significantly on shrubs and even tree bark, but during the summer months they much prefer grasses and forbs (broadleafed herbaceous plants).

Plant-based diets, especially those containing grasses, are difficult to digest because of their high cellulose content. Like other members of this and several additional families, elk have a four-chambered stomach. The first stomach stores food and makes it available for re-chewing to break down the plant fibers. The other three stomachs process the food using diverse groups of microbes that specialize in breaking down cellulose.

Also, unlike deer and moose, twin elk calves are rare. However, elk cows are excellent mothers and survival is often high. Before wolves were reintroduced, bears were their most common predators, mostly on very young calves.

All males of the member species of the cervid family have antlers with one exception, the water deer of China and Korea. However, elk may reign supreme. Moose antlers can weigh more but are so different that they are scarcely comparable. A large set of elk antlers may weigh 40 pounds or more and be four feet wide and tall.

Antlers are used for contests between bulls and not really for defense against predators. The right to breed is on the line though and the battles can be deadly. I witnessed such a battle in Colorado’s Rocky Mountain National Park one evening. In the morning, one of the contestants lay dead, apparently from a mortal thrust of his opponent’s antler.

Elk have two distinct looks. During the summer both male and female elk wear a thin coat that keeps them cool in the warm weather. This coat is a rich coppery brown color with the appearance of a velour fabric. In autumn, the summer coat is replaced with a thick warm tan-colored coat. The rump patch is always a creamy white and earned them their Native American name of wapiti, meaning something like, “white butt”.

Before European settlement, elk in the millions occupied most North American habitats. They are truly habitat generalists, although at one time some scientists speculated that elk were plains animals and only occupied the mountains when driven there by hunting pressure. Personally, I don’t buy that line of reasoning. Re-introductions throughout the country are reestablishing elk in habitats from open grasslands to deep dark deciduous forests, proving them highly adaptable.

From elk bugles rising on a foggy autumn morning to spotted elk calves scampering behind their mothers through a flower-strewn meadow on a summer day, elk are one of the animals that put the wild in wildness. Without them our woods and prairies would be something less.