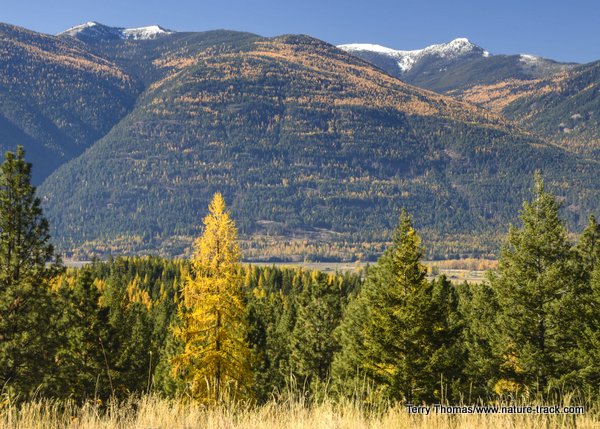 After most of the broadleafed trees have lost their leaves, the larches are still putting on a show on this mountainside near the Idaho/Canada border.

There is a story, true or apocryphal I am not sure, about a couple that bought property and moved to North Idaho around Thanksgiving time. They immediately set about clearing the property of what they felt was an excessive number of dead conifers. After a few days, a neighbor stopped by to see what they were up to. They explained about the dead trees and the neighbor laughed himself silly. “Those aren’t dead trees!” he finally spat out. “Those are larches! They lose their needles each fall just like maples or cottonwoods and grow new ones each spring!”

Larches, sometimes called western tamaracks, are deciduous conifers, evergreens if you will, that aren’t ever-green. It is true that these beautiful trees not only lose their needles (modified leaves) but turn a beautiful golden hue during the transition, just like aspens.

There are three native species in the genus, Larix. Our western larch, Larix occidentalis, is found from British Columbia south to Washington, western Montana, northern Oregon and northern and west-central Idaho. So, we won’t see them around Idaho Falls, but just a few hours north into Montana and larches are very evident in the fall.

Tamarack, or Larix laricina, is found across most of northern North America from the Yukon to Nova Scotia and south through Minnesota and east to New England.

Besides being a more southern species, western larch is a much different tree than its northern and eastern cousin, tamarack. According to the Forest Service, tamarack is a climax species and tends to dominate large expanses. Larch is just the opposite: it is a seral species, often an important component of other climax forests but never forming pure stable stands.

Other than the fact that both species turn yellow each fall, they are very different. Our western larch species is a large and long-lived tree. Huge specimens stretch over 200 feet tall, have a six-foot diameter and may be 900 years old. On the other hand, tamaracks grow to a maximum of 75 feet, with a basal diameter up to 20 inches and living, at most, 200 years.

Given the size differences, it isn’t surprising that the wood value of the two species differs as well.  The tamarack is used mostly for pulpwood. The western larch is considered to be one of the most valuable tree in western forests. Its wood is dense, straight grained and decay-resistant and burns hot and long in a woodstove.

The third species, alpine larch, Larix lyallii, is found near timberline in North Idaho and southern British Columbia and Alberta and in the Cascade Range of Washington. This small, commercially inviable tree occurs in tiny disjunct patches that hint of glory days long past when it is believed to have been part of a vast forest that stretched for hundreds of miles.

So, why aren’t there larches around Palisades or on the Henrys Fork? It appears that several factors are working together to thwart the larch from extending its range southward. First, the larch prefers lower elevations, growing as low as 1,500 feet above sea level. Idaho Falls sits at about 4,200 feet a.s.l. Soils may also be an issue. The larch prefers acidic soils and our soils run to the basic side. Mostly though, it appears that larch prefer a moister climate.

It doesn’t appear that our climate is going to get wetter and the Teton Range is still rising, so if we want to see the larches change color, we will have to head north to where they live. A little travel isn’t such a bad deal.