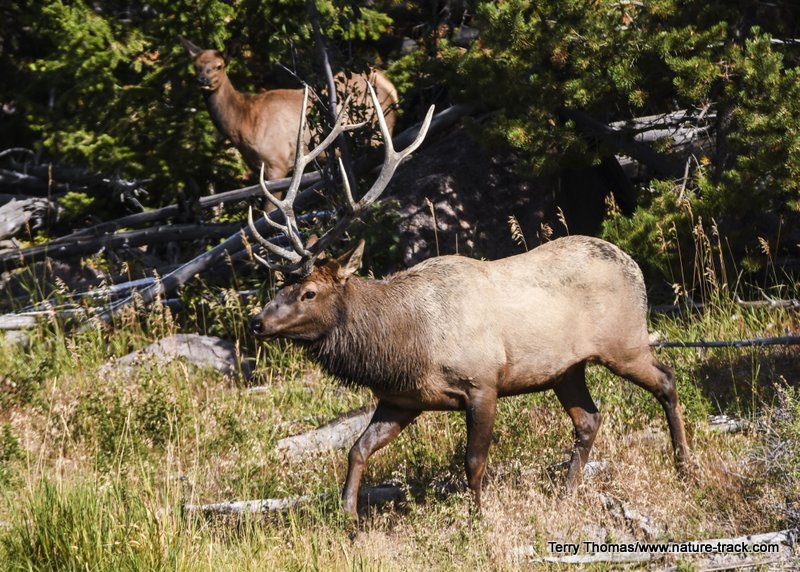 Elk have been on this continent for many thousands of years and at one time numbered around 10 million. Today, there are about a million elk on the North American Continent.

Everyone has their favorite animal, but in the fall elk must reign supreme. Hunters in droves chase them with everything from sharpened sticks to muzzleloading or ultra-modern rifles, they are the number one attraction in Yellowstone and Grand Teton national parks and Harriman State Park offers horseback rides to see and hear elk put on a show. Hearing bull elk bugle, seeing long lines of elk migrating to winter range or even just tracks in the snow are annual thrills not to be missed.

There is a lot more to know about elk than just what we can observe. Before European settlement, there were an estimated 10 million elk on the North American continent. They had conquered every habitat except tundra, true desert and the Gulf Coast. There were six subspecies of elk: Roosevelt—sometimes considered the largest in body size, the Tule elk—restricted to California and once thought to be extinct and also the smallest of the subspecies (which may be habitat related not genetic), The Rocky Mountain elk—by far the most common, Manitoban elk—found in North Dakota and the southern Canadian provinces of Manitoba, Saskatchewan, and north-central Alberta—larger than the Rocky Mountain subspecies but with smaller antlers. There were two other subspecies, the Eastern and Merriam’s elk, both hunted to extinction by 1880.

What most people don’t realize is that there are at least eight other subspecies of Cervus canadensis (sometimes written as Cervus elaphus—the debate still rages but “canadensis” seems to be winning in the scientific literature) in the world. They range from Russia’s Siberia through Mongolia, Tibet, China and even India. These are all subspecies but some of them look more like the Rocky Mountain elk we see than others.

Interestingly, the red deer of Europe is not a subspecies of elk as was once thought. Although this animal bears a resemblance to North American species, it is much smaller. Check out this link to see the difference https://www.youtube.com/watch?v=NDOV2emdjHU . The red deer stag (male) also doesn’t make a bugle or whistle like a bull elk. Rather, it’s sound is more like a roar.

Elk have been a conservation success story. At one point, even the Rocky Mountain elk was hunted until only the most remote canyons could shelter them. With the formation of Yellowstone National Park in 1872, elk were eventually protected and quickly expanded as their natural predators were persecuted mercilessly. With the removal of wolves, mountain lions and bears, elk numbers in Yellowstone soared and this herd became the source of elk for nearly all attempts to reestablish them in the Rocky Mountains.

Over time, efforts to restore elk have led to the establishment of populations in numerous states including Pennsylvania, Tennessee, Kentucky, Michigan, Wisconsin, North Carolina, West Virginia, Missouri, Arkansas and Virginia. All of these are the repatriation of populations and not introductions. The Rocky Mountain subspecies is used as it may be the closest living relative to the extinct Eastern and Merriam’s elk.

Elk have also been introduced into New Zealand, Argentina and Chile. Due to their adaptable nature, in these places they have prospered too well, becoming pests and labeled as invasive. Some day we will learn that bringing in non-native species, even one as awesome as elk, is seldom a good idea, but apparently not yet.