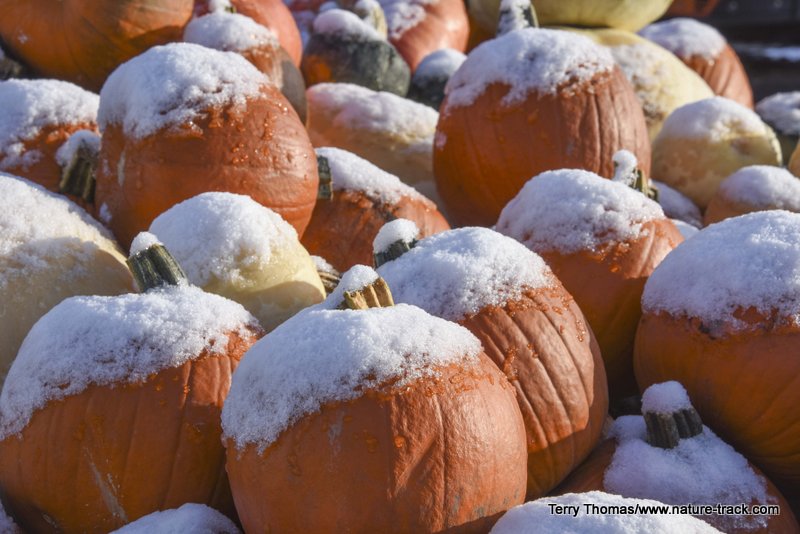 You might be surprised to learn that these beautiful pumpkins are not the same ones you will be eating in your Thanksgiving pumpkin pie.

Before you eat that first bite of pumpkin pie today, I need to tell you a secret. If the filling came from a can, especially one marked Libby’s, it isn’t pumpkin at all—at least not of the jack-o-lantern type—despite its name, Dickinson Pumpkin. Dickinson Pumpkin belongs to the squash species known as Cucurbita moschata, the same species as the butternut squash. It has a tan rather than orange skin but the flesh is bright orange and flavorful.

When I decided to write about pumpkin, I had no idea the subject would be so complicated. Pumpkin isn’t pumpkin? One species having two distinctly different fruits? Squash that really isn’t a fruit but rather a botanical berry?

Experts do seem to agree that all squash species likely originated in the New World. Native specimens occur from South America to Florida to Maine. It may also be one of the first plants actually domesticated by humans—perhaps 10,000 years ago.

Botanists also agree that true pumpkins—the heritage variety for pumpkins is the Connecticut Field pumpkin—come from the species, Cucurbita pepo, the same species that spawns crookneck, acorn and spaghetti squash as well as the hard-shelled gourds.

How can all these very different squashes have the same scientific name? They are all cultivars (produced by careful breeding and selection) or in some instances, subspecies, of the original plants. For instance, all the jack-o-lantern type pumpkins are considered Cucurbita pepo pepo, a subspecies. There are many varieties of Cucurbita pepo and they grow in a wide range of habitats and conditions. The morphological characteristics in this one species are so vast that many of the cultivars and subspecies have been misidentified at various times as unique species.

My six-year-old grandson, Keller, knew something about pumpkins that I didn’t know. Pumpkins technically aren’t even fruits, but rather berries. According to Wikipedia, “In botanical language, a berry is a simple fruit having seeds and fleshy pulp (the pericarp) produced from the ovary of a single flower”. Examples include, avocados, bananas, currants, grapes, watermelons, cucumbers, and, you guessed it, pumpkins.

Before you go searching the seed catalogs for Dickinson pumpkin seeds, you should know that they likely won’t thrive here. Pumpkins are warm weather plants and Dickinson pumpkins are extra particular, Zone 5 being their tolerance level (Idaho Falls is Zone 4, or colder than Dickinson pumpkins prefer). However, I find the cultivar, jack-o-lantern is quite tasty as a baked squash and for pumpkin bread. There are also several small varieties of Cucurbita pepo pepo that make fine pies. Try Small Sugar, Winter Luxury or New England Pie varieties.

One final thing about pumpkins and their relatives. The Cucurbita pepo species is called winter squash. I occasionally wondered what that really meant so I looked it up. A winter squash isn’t grown in the winter, nor can it be planted earlier than other squash. A winter squash has a hard, often inedible skin and if harvested and stored correctly, may last up to six months in storage, well into the winter months. Hence, winter squash. Fascinating.

Knowing that the pumpkin in my pie isn’t the same as the pumpkin species in my garden is a revelation, but it isn’t going to keep me from enjoying this wonderful holiday treat. Topped with real whipped cream, it will always mean Thanksgiving to me.