I turned the owl pellet over in my hands. It was oblong and composed of gray fur and bones from the owl’s victims. I slowly teased it apart, separating bone from hair. I was particularly interested in the jaws and skulls within because here, a naturalist could hope to divine what the owl was preying on. After consulting my field guide, I was reasonably sure that this owl had dined on a deer mouse and a vole, two tiny unsung heroes of the mammal world.

As a group, small mammals (less than 11 pounds—about marmot-sized and smaller) make up the vast majority of mammals on this planet. Yet they are seldom recognized for the roles that they play in the ecosystem, largely because we are generally unaware of their presence. They go unnoticed because they are small, often nocturnal and many prefer to hide rather than run when danger threatens.

As the mouse and the vole in the owl pellet show, a major role played by small mammals is their responsibility in the food chain. Predators—and that includes many snakes, raptors of all kinds, other small mammals such as weasels and pine marten, shrikes, badgers, coyotes, foxes, bears, bobcats and lynx, to name a few, are highly dependent on small mammals for survival. Without these little guys, the biodiversity we enjoy would be strikingly different.

Part of the reason small mammals play such a tremendous role in nature is their high reproductive capability. Especially among the rodents, which represent 42% of all mammal species, it is not uncommon for females to have three or more large litters a year. Females often first breed at a young age as well, sometimes shortly after weaning. Their proclivity for procreativity churns out the biomass necessary to sustain the complex of predators that depend upon them.

While we may be all but ignorant of their existence, small mammals still provide many ecosystem services besides being on the dining list of most predators. For instance, fossorial mammals, ones that create dens and tunnels underground, turn the soil like rototillers. Their tunnels increase water infiltration and improve soil condition.  Others, especially rodents, distribute seeds about the landscape when they build their winter caches. Unrecovered caches sprout into next season’s plants.

Being small is advantageous in many ways. It is much easier to hide from predators, food is often abundant and small animals can take advantage of climate moderating microhabitats such as underground tunnels and pathways beneath the snow.

On the other hand, being small has its disadvantages too. Many small mammals have very short life spans. Shrews, for instance, rarely live more than a year and mice seldom more than two years. Short lives limit what young can learn from adults. Small size also means a high surface area to volume ratio—their little bodies are heat sinks and maintaining a steady body temperature is a constant challenge. There may be an almost constant demand for food to fuel their high metabolisms.

Humans may never learn to appreciate animals we rarely see, but nature does. Just ask the owl. 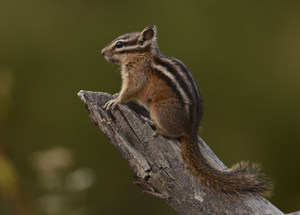 Small mammals, like this chipmunk, are actually some of the heavy lifters as part of an ecosystem. Without them, the world would be far different.