The American Badger, a relative of minks, martens and wolverines, is a fearsome predator of ground dwelling animals. 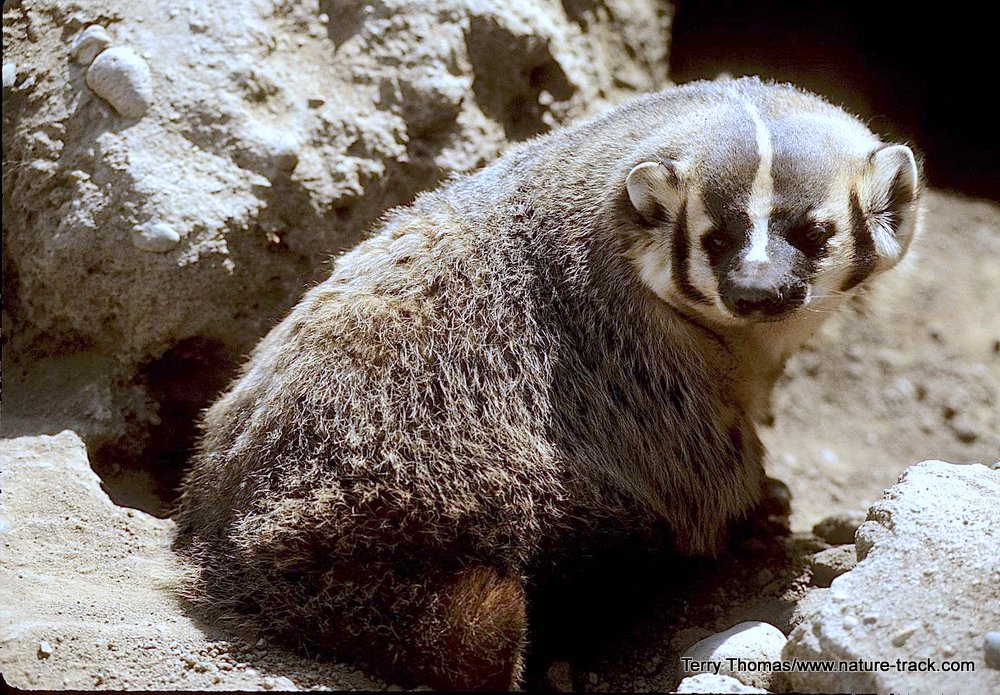 With the onset of winter, some animals become more visible and others disappear for the season. American badgers are one of those that pull a disappearing act, migrating into underground burrows to await spring when food is once again abundant and days are pleasantly warm.

Although badgers are common throughout much of the West, seeing a badger is uncommon for me and is an event worth noting in a journal. I don’t like knowing that for three or four months, seeing a badger is next to impossible unless I head to more southern climes, so I decided to do the next best thing and learn a bit more about them.

As members of the mustelid family which includes weasels, skunks, otters, wolverines, martens and mink, badgers are carnivores, hunters of the first order. Like other members of the family, badgers are short-legged. Badgers though are squat, wide, short-necked and powerfully built, not long and lean like minks, marten and weasels. Their head and body are about 20-22 inches long with a broad six-inch-long tail. A badger’s face is distinctly marked with a white stripe from nose to the top of the head, white cheeks and black spots in front of the ears. Though uncommon, a really big badger may tip the scales at 30 pounds and they are often mistaken for wolverines.

As I write this, a bleached badger skull sits in front of me. The bone is thick and heavy, the canines over half an inch long from gumline to tip. There are large ridges and hollows that accommodate thick muscle, giving the badger very powerful jaws. The fox skull next to it is almost dainty in comparison.

American badgers sport the scientific name of Taxidea taxus, which, in Latin sort of means, “like the European badger” which colonists thought it looked like. However, unlike the highly communal European badger, the American badger is mostly a solitary animal except during family time.

Much like bears, badgers mate in early fall but implantation of the fertilized egg is delayed for up to six months. Once implantation occurs, the female gives birth about six weeks later. By then, the males have long since moved on and the female raises the young by herself. Within 12 weeks, the youngsters begin to disperse, looking for territories of their own.

Like many predators, badgers will eat what they can get, but they specialize in hunting ground dwelling animals like ground squirrels, voles, mice and pocket gophers. With their short legs and large claws, they can dig possibly better than any other mammal. They are intelligent hunters as well. Knowing that ground squirrels often have multiple escape routes in their burrows, they will often block these additional exits with dirt, rocks or even wood before digging out the main tunnel, hoping to corner the squirrels against a dead end.

Badgers can be found from Ohio to California and from the Northwest Territories in Canada to central Mexico. Their density though, depends on food supply. Where food is abundant, home ranges for both males and females may be as small as 1.2 square miles, while in areas where prey is scarce, male home ranges may exceed 200 square miles.

Each badger may dig up to 1,700 burrows a year in search of prey and in creating their own living quarters. All that digging creates homes for burrowing owls, snakes, rabbits and other species. The tillage of the soil greatly influences what plants will grow and improves water infiltration making badgers ecological keystone animals worthy of respect.