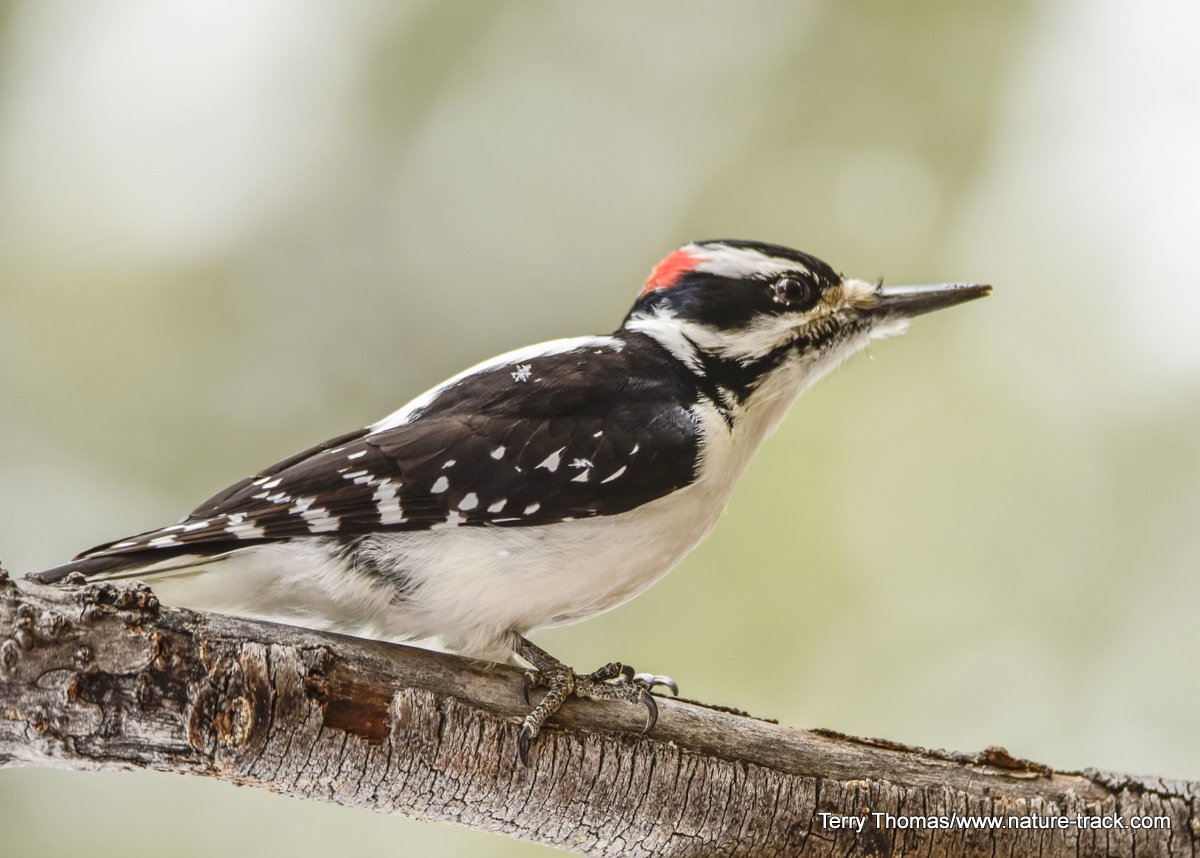 The bill on this male hairy woodpecker is approximately as long as the rest of the head, a simple way to distinguish a hairy from a downy woodpecker

I scattered a few peanuts on the picnic table on our deck and it did not take long before half a dozen species were lining up for a freebie. One of those species was a hairy woodpecker, a favorites of ours partly because they are common and easy to see.

Now, birds do not have hair, so what is up with the name of this woodpecker? It is named for a patch of long thread-like white feathers in the middle of its back. Not really hair, but the point is made.

Hairy woodpeckers are about the size of a red-winged blackbird and are black and white. The male adds a bit of red to the back of its head. This bird is widespread, ranging from central Alaska to Central America and from the east to the west coast. They can be found in all 48 states and 10 Canadian provinces. Their habitat reaches from sea-level to high mountain forest.

With such a wide distribution, it is expected that plumage will be quite variable, and indeed, there are currently 17 subspecies which may vary dramatically in pattern and size. For instance, eastern hairy woodpeckers have a more spotted wing than western subspecies.

In researching this bird, I found it interesting that there seems to be disagreement on just exactly where the genus belongs. I found three different scientific names: Dryobates villosus, Leuconotopicus villosus and Picoides villosus. It would appear that the Picoides moniker has mostly fallen out of favor and Dryobates leads, so that is what I have settled on: Dryobates villosus.

There is one behavioral clue as well. Hairy woodpeckers tend to work the trunks of the trees. Downy woodpeckers will often work out onto the smaller branches.

The other black and white woodpecker in our area is the yellow-bellied sapsucker. If you are looking at a male sapsucker, it will have a large red patch on the nape and also a red throat. However, females don’t have this, so look for a white patch on the wing. If it is there, it is a sapsucker not a hairy woodpecker.

Hairy woodpeckers are easy to attract to bird feeding stations using peanuts and or suet blocks. Both are favorites of these birds, especially in the winter. Suet will keep them around until the suet is gone.

However, about 75 percent of a hairy woodpecker’s diet is insect larva, especially woodboring beetles and bark beetles. When populations of beetles are up following a fire or a series of warm winters that favor overwinter beetle larva survival, hairy woodpeckers respond by producing more young that survive to adulthood. That makes them important in helping to maintain a balanced environment.

Hairy woodpeckers are one of those species lucky enough to have actually increased slightly between 1966 and 2019. I doubt humans can take much credit for that, it is likely more of a testament to the adaptability of this particular bird.

Hairy woodpeckers, and the chance to see them often, are one of the joys of winter. I am glad to have them back in my life for a while.