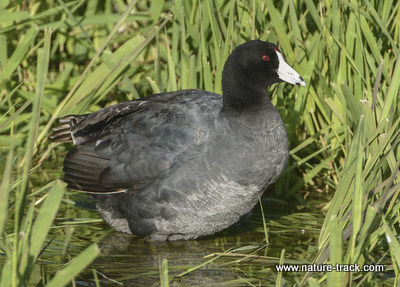 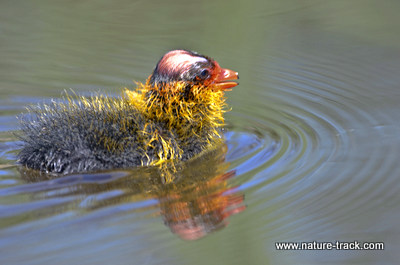 Coots aren’t the most handsome of birds but their success in a changing world deserves respect.

Coot chicks may be inspiration for horror movies but their parents love the gaudy dress.

While voting last week I ran into some friends. They told me that they had taken the advice on my website blog and had gone to Camas NWR to see the sandhill cranes. But what they really wanted to talk about were the American coots they had seen. Both confirmed that they had never seen coots and they were pretty excited about it.

I was stunned. I assumed everyone has seen plenty coots as they are one of the most common birds in our marshes. More, they told me that they had talked to several friends about their experience and the friends confessed that they hadn’t ever seen coots either.

Perhaps I have been a bit presumptuous in assuming everyone knows what a coot is and I will try to remedy that now.

Any waterbody that is lined with reeds such as bulrush and cattail is likely to have coots. It doesn’t matter if you are in Georgia or Washington state. Coots are ubiquitous from coast to coast in suitable aquatic habitats.

Given how widespread and common they are, not realizing you are looking at coots is much more likely than truly not seeing them. Coots are often mistaken for ducks despite the fact that they are in the Rail family and related to sandhill cranes, gallinules and soras.

Coots are all gray-black with white bills and red eyes. The white bill is triangular in cross section as opposed to the flattened bill of a duck and often sports a dark ring near the tip. Coot feet are not webbed like a duck either. Coot toes have lobes that can fold back when the animal is walking but still aid in swimming.

Coots are also gregarious, often forming large loose-knit rafts of birds. Despite their penchant for large groups, watch a group for a while and they will seem like a quarrelsome lot. Bobbing their heads like pigeons, it seems that they have a lot to say about their neighbors, with a lot of cackling, grunting and croaking as they go about their business.

Coots seem to be constantly swimming, sometimes with their young on their back, using the wide lobes on their toes to good effect.  Periodically, they dive beneath the surface to reappear about 30 seconds later somewhere else.

Watching coots take flight is much like watching your kid wobble off on his or her maiden bicycle voyage.  You want to chase alongside and help them out.  Because they are configured to dive, with feet set far back on the body, take-off is a laborious process with the coot running along the water, wings flapping furiously, until the round body can get airborne.

Adult coots won’t win any beauty contests but their chicks could star in horror movies. The little guys have striped red and black bald heads, red bills and feet that seem as big as their bodies. Chest and neck are covered in long yellow or red feather plumes known as chick ornaments.

These plumes seem to be a poor adaptation as they make an otherwise obscure chick very visible. However, research has demonstrated that coot parents play favorites. Chicks with the brightest plumes get the most parental attention.

Because they are so common, coots are often considered a nuisance. Coots deserve more respect than that. Animals that can thrive in this world these days may just be the superstars of the future.