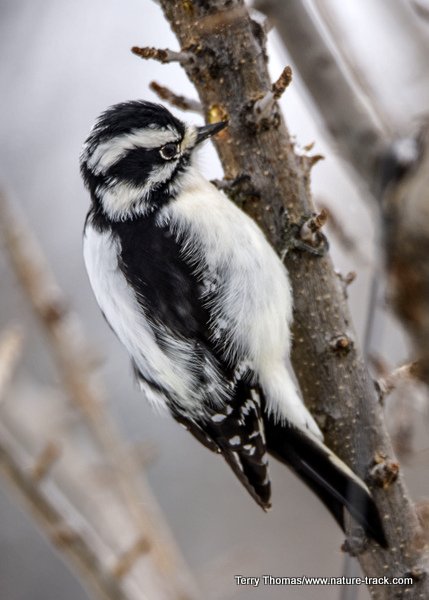 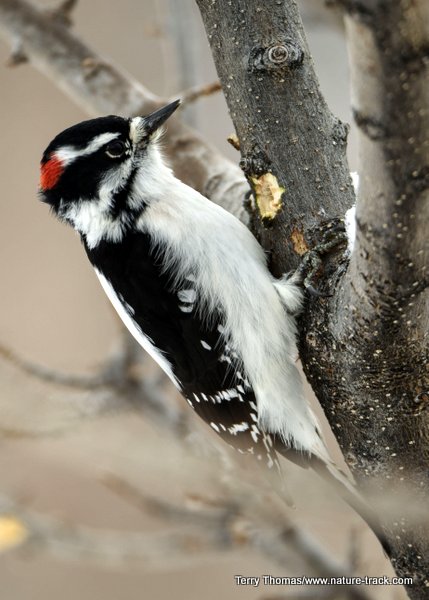 The birdfeeders sat empty for several weeks while we were out of town and it took a few days for the birds to re-discover them once we returned. Then in one morning, we had red-breasted nuthatches, black-capped chickadees, house finches and a male downy woodpecker all hanging around the feeders at once.

We had seen the female downy woodpecker occasionally during the summer so we knew she was hanging around, but this was the first time we had seen the male since spring. He spent most of his time checking the tree trunks around the feeders hoping to find a few insects tucked inside the bark.

Downy woodpeckers are the most common woodpecker to visit backyards. Since they don’t migrate, they can provide entertainment throughout the year and hanging bird feeders (blackoil sunflower seed and peanuts are favorites) and suet blocks is an almost sure way of encouraging them to visit your yard.

Downy woodpeckers are the smallest North American woodpeckers. They are about the size of a house sparrow with a six-inch long body and a ten-inch wingspan. This small size helps them to take advantage of resources other woodpeckers are too big to use. You can often see downy woodpeckers on weed stems pecking at larva-containing galls or searching for insects among bark on tiny branches.

The sexes of the downy woodpecker are similar: black wings with white spots and black and white barred heads. The chest and back are white and an oblong white patch shows in the middle of their back when the wings are folded. Males do sport a red spot on the back of the head and juveniles have a red crown.

These tiny woodpeckers are real charmers. They are cute and energetic—seemingly constantly on the move. More than most woodpeckers, they race across and even down trunks when searching for food. They fly with the up-down undulating flight typical of woodpeckers where a few wingbeats are followed by wings folded against the body.

Downy woodpeckers have a short high-pitched pik pik pik call that when run together is called a whinny. They don’t sing a mating song, but rather, like most woodpeckers, use drumming on trees as their mating call. Both sexes drum a rapid even-toned beat that attracts mates and signals readiness for breeding.

Downy woodpeckers are considered numerous and widespread. They are found in every state but Hawaii and all but the northernmost Canadian provinces.

These diminutive woodpeckers are nearly completely beneficial birds.  Many of the insects they eat are considered forest or garden pests and the holes they create for nests and during feeding also serve later as nesting cavities for birds such as the mountain bluebird.

Despite the fact that they are common birds, I still look forward to seeing the downy woodpeckers this winter. I am happy to trade a little suet and peanuts to watch them. Their antics add color in an otherwise sleepy world.