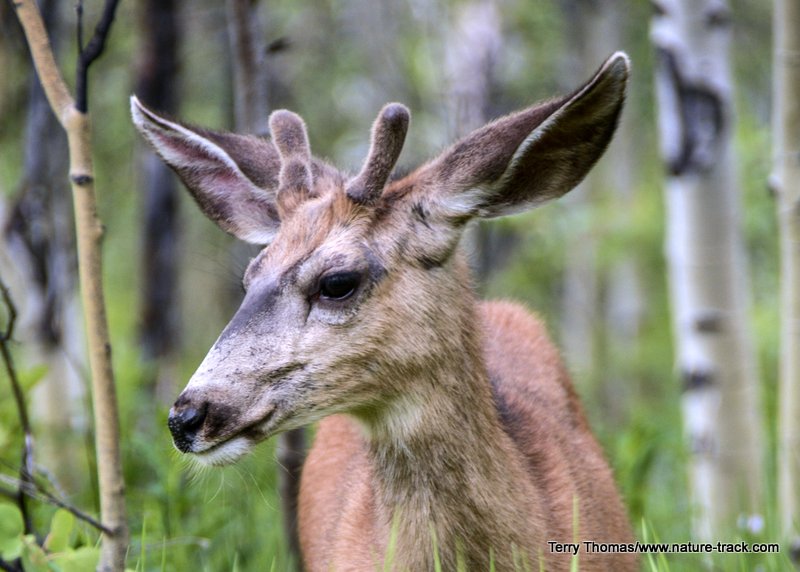 This mule deer buck is effectively listening for danger in two directions at once. His huge ears funnel an incredible amount of sound to him.

A friend recently posted a video depicting the response of several woodland creatures to the presence of owls. I think that I was supposed to hear the chickadees and red squirrels screaming out warning calls but I heard nothing, not uncommon for me as I have lost some of my higher frequency hearing. Sadly, the experience reminded me of the Joni Mitchell song, Big Yellow Taxi, and the line, “Don’t it always seem to go that you don’t know what you’ve got till it’s gone.”

Hearing is simply the detection of sound. This usually occurs through ears, but not always. Snakes, for example, have no external ears. They can detect sound in the form of vibration though, so in a sense, they too can “hear”.

Hearing is an important component to survival for most animals. They use hearing to detect prey and to elude predators. Hearing is also critical for communication within and between species. Birds singing in the springtime to attract mates is a clear example.

So, which animal has the best hearing? It certainly isn’t humans. We can hear frequencies between 20 and 20,000 Hz, a modest range when compared to other animals. In the mammalian world, bats, which can hear frequencies up to 120,000 Hz, are considered the champions. They can emit high frequency echolocation “pings” that bounce off objects. They then map out the world around them by determining how quickly the echo returns to them. Sonar works the same way. This gives the bat a significant advantage over its prey which doesn’t realize it is being targeted. Or does it?

One prey species, the greater wax moth, has developed hearing so acute it can actually detect the echolocation pings that the bats emit, thus neutralizing the bat’s greatest hunting strategy. These moths can hear sound frequencies up to 300,000 Hz.

Hearing in the ultrasound range, sound that is outside a human’s upper sonic range, usually comes at a disadvantage; sacrificing hearing in the lower end of the spectrum, called infrasound, or sound frequencies lower than a human can detect. Here, another unlikely creature takes center stage. The average pigeon can hear sounds as low as 0.5 Hz, and can detect distant storms, earthquakes, and even volcanoes. So, when pigeons flush for no apparent reason, perhaps they are hearing something that we cannot.

Elephants too, can hear into the infrasound range with a sound range of 1Hz to 20,000 Hz. Their huge external ears also serve a more physical purpose. They act as huge sound funnels, cooling fans and even as body temperature regulating radiators.

The absolute sound that an animal detects is only part of hearing acuity. A human’s ear contains only three muscles to control it, a cat’s ear has over 30 and like many animals, can rotate their ears like antennae, giving them almost 360-degree coverage.

Owls, on the other hand, don’t rotate their ears. However, the left and right ears are positioned differently on their heads. Sounds, such as the squeaking of a mouse, reach the ears milliseconds apart, allowing the owl to judge with pinpoint accuracy, distance and direction of the sound.

Humans have one advantage in the hearing arena though, one I use quite frequently. It is called selective hearing. We hear what we want to hear and ignore the rest.