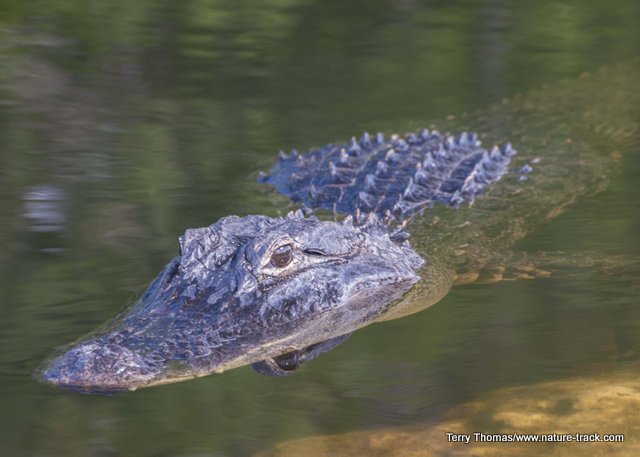 Alligators became alligators long before the dinosaur extinction and haven’t changed their winning design significantly since then.

Now that I am on Social Security, my kids consider me a living fossil. Well, actually, they have thought that for a long time. My youngest son delights in calling me, “Old Man”, a title I smugly know he will carry one day.

In reality though, I am not a fossil, living or otherwise. Some scientists consider living fossils to be failures, forced into evolutionary blind alleys from which there is no escape or progress. However, if you have ever stared into the eyes of a crocodile or alligator, you realize just how false this is. There isn’t a dead-end there, but perfection reached 100 million years ago with little need for further adaptation. They aren’t going to rule the planet, but should one of those said rulers wander into their world, they might find just how perfectly attuned these killing machines are.

So, living fossil is not a derogatory term at all. It delineates species that made it to the peak of their evolution millions of years ago and haven’t had a significant reason to change. That means that the living species and the fossil species are recognizable as the same species despite the millions of years that separate them. They are so successful that they continue to weather the tests of time as the environment changes around them. In a word, they reached perfection and saw no reason to improve upon it.

The definition of living fossil is, “an organism that has remained the same form over millions of years, has few or no living relatives, and represents a sole surviving lineage from an epoch long past.” They sit at the very end of their branch in the evolutionary tree often as the only member of their genus (occasionally there may be two), but sometimes an entire order. They may have unusual traits that are unknown in other living things but are represented in the fossil record.

There are many species of organisms that have not improved upon their design in millions of years. Possibly every life form from cyanobacteria to mammals include living fossil species. Some of the more commonly thought of species include all the crocodilia, coelacanths—two species of fish from a large order thought to have gone extinct 66 million years ago (until re-discovered in 1938), horseshoe crabs, nautiluses, half a dozen shark species, pig-nosed turtles, snapping turtles, pelicans, sandhill cranes, spectacled bears and mountain beavers to name a few in the animal kingdom. Plants include the gingko tree, ferns and mosses.

The term, living fossil, as defined and used, infers that the evolutionary process has completely stopped. This has caused heated debate among scientists with some calling for the retirement of the term, living fossil, altogether. Most scientists recognize however, that genetic fine-tuning is always occurring even in these species. One author compared it to a car with a successful body style. There may not be much change on the outside, but each year there are upgrades such as electric windows, more efficient engines, GPS, and more. These changes are “under the hood” and don’t modify the overall design.

I like the concept of living fossils though. To think that an organism, the basic form of which was created millions of years ago, can still make a living today is satisfying. I doubt anything humans create will stand that test of time.