One of the most common birds in North America is not a native species. It is the house sparrow, a sparrow unrelated to native sparrows, and once called the English sparrow after its native land. In 1851, the house sparrow was introduced into Brooklyn, New York, in hope that it would help control some insect pests that were plaguing the city. It also brought comfort to the many English immigrants to see their native bird.

The house sparrow found this continent to its liking, and still naively unaware of the biological bomb they were releasing, people intentionally introduced the house sparrow into about 100 other eastern cities as well as San Francisco, California and Salt Lake City, Utah in the 1870’s. By 1900, house sparrows were firmly entrenched throughout the continent, and only the coldest climates such as Alaska and northern Canada have kept them at bay.

Why are house sparrows so successful? Ornithologist Joe Marshall summed it up this way, “This loud and messy bird shares with two other species, Rattus rattus and Homo sapiens, traits which make the three of them a blight upon the earth: omnivorous food habits, the ability to colonize every corner of the world, and an inordinate capacity to procreate—in geometric progression.” Ouch. Harsh.

These traits earned house sparrows the reputation of pests, even in their home land. They descended on grain crops in great flocks and fouled manmade structures with their nests and excrement.

Elsewhere in the world they did no less, and their competitive and bully-like natures created another problem as well. As early as 1889, ornithologists were noting that the aggressive house sparrows were successfully defending nesting sites preferred by native birds. One ornithologist noted the house sparrow attacking 70 species of native birds.

These aren’t just squabbles between recalcitrant neighbors. They are genocide, with house sparrows destroying eggs and nestlings as well as driving off the parents and usurping their homes. Although definitive research is still lacking to determine if displacement by house sparrows is causing widespread declines in native species, this is assumed to be the case.

World domination seemed to be the goal of the house sparrow, but the New York introduction (1940) of the west coast native, the house finch, has stymied that achievement. Like the sparrow, the number of competitive finches quickly soared and ornithologists noted a concurrent decline in sparrow populations.  Thoughts that this might be coincidental were banished when disease caused finch numbers to wane starting in 1994. Sparrow populations quickly rebounded.

In an odd twist, house sparrow numbers in their native land have declined by as much as 60 percent over the last several decades. Experts point to increasingly “hygienic” farming as one culprit. Great Britain ornithologists would really like some of ours back.

Despite their bad habits, house sparrows do have some redeeming qualities. They are a capable and scrappy little bird, and they watch each other’s backs. Those are certainly traits we can admire. Their antics are fun and interesting to watch and that should be worth something. 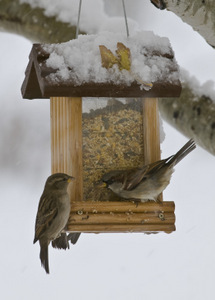 The ubiquitous house sparrow is a transplant from Great Britain, but may be the most abundant bird at your feeders. It now competes with native birds for food and nesting sites.