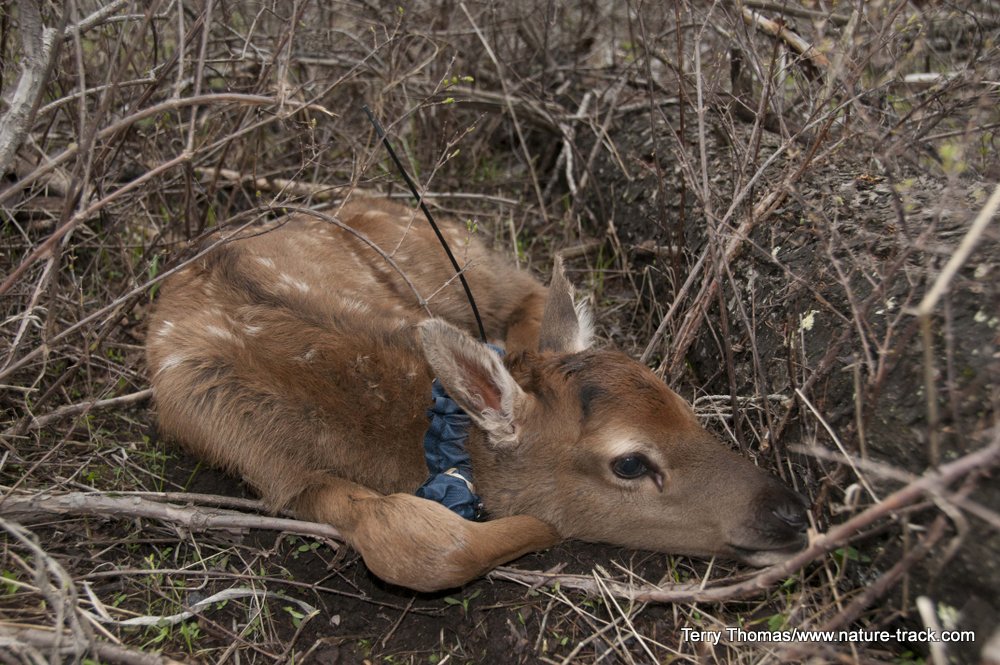 Placing radio collars on elk calves in Island Park resulted in some unique movement data that gave biologists a clearer image of elk migration in the Island Park herd.

The classic method for understanding elk migration movements is to go to winter ranges and put on a bunch of radio-tracking collars, then follow the animals to summer ranges. This is effective, but results in an incomplete picture of migration from summer range to winter range.

It is far more difficult though, to go to summer range and do the same thing. The elk are spread out and cannot be easily moved from conifer cover, even by helicopter, making trapping nearly impossible. There is one small window of vulnerability though, and that is when calves are less than three days old and easier to catch. About ten years ago, when technological advances allowed for miniaturization of radio tracking collars, a study was conducted in Island Park, capturing and collaring elk calves during late May and early June. Although the study was designed to evaluate what kills elk calves, the side benefit of trailing elk from summer range to winter range was even more enlightening.

Autumn migration is often thought of as a north to south affair and on a continental scale, that is often true. At a more local level though, it is not always the case. For instance, most elk and deer in the Tex Creek herd move north for the winter. It is better thought of as moving from high elevation summer ranges to lower elevation winter ranges, regardless of the direction.

The Island Park elk calves, following their moms to winter range, revealed that elk in Island Park move east to west, north to south and south to north, depending on where they summer and winter.

Elk living along the Centennial Range are as likely to head north over the hill toward winter ranges around Montana’s Lima Reservoir as they are to move south to Sand Creek Desert. It was surprising to discover that many elk that live on and around Sawtell Peak do not head south for the winter. Instead, they cross the Red Rock road somewhere near Rock Creek, cross the mountains west of Henrys Lake and then take a hard left and follow Highway 87 into Montana.

Previous studies discovered that the elk that leave the southwest corner of Yellowstone as far away as the Pitchstone Plateau head in two different directions, with major crossings of Highway 20 occurring between Valley View and Targhee Pass, just above the Mesa Falls road into Harriman State Park and around the top of Ashton Hill. Those crossing up near Targhee Pass are headed to Montana’s Wall Creek winter range about 30 miles north of Reynolds Pass. Those that cross by Harriman and Ashton Hill are headed to the Sand Creek Desert along with a significant portion of the Island Park/Warm River elk.

Hundreds of migrating elk cross Highway 20 and Highway 87 in Island Park and this has sparked a debate about the need for wildlife overpasses. Overpasses have been shown to work well, reducing automobile-wildlife crashes by as much as 85-90 percent. An ongoing study of wildlife-vehicle collisions in Island Park has shown that there are four elk crossing hot spots: the three aforementioned ones and Reynolds Pass. These areas are broad expanses, not discreet points. In 2017-18 there were 27 road-killed elk detected (also 74 mule deer, 12 white-tailed deer, 9 moose and 6 pronghorn) on Highways 20 and 87 combined.

Fremont County voters soundly rejected the idea of a wildlife overpass in Island Park. However, the issue isn’t going away and will only get bigger with improvements to the road.