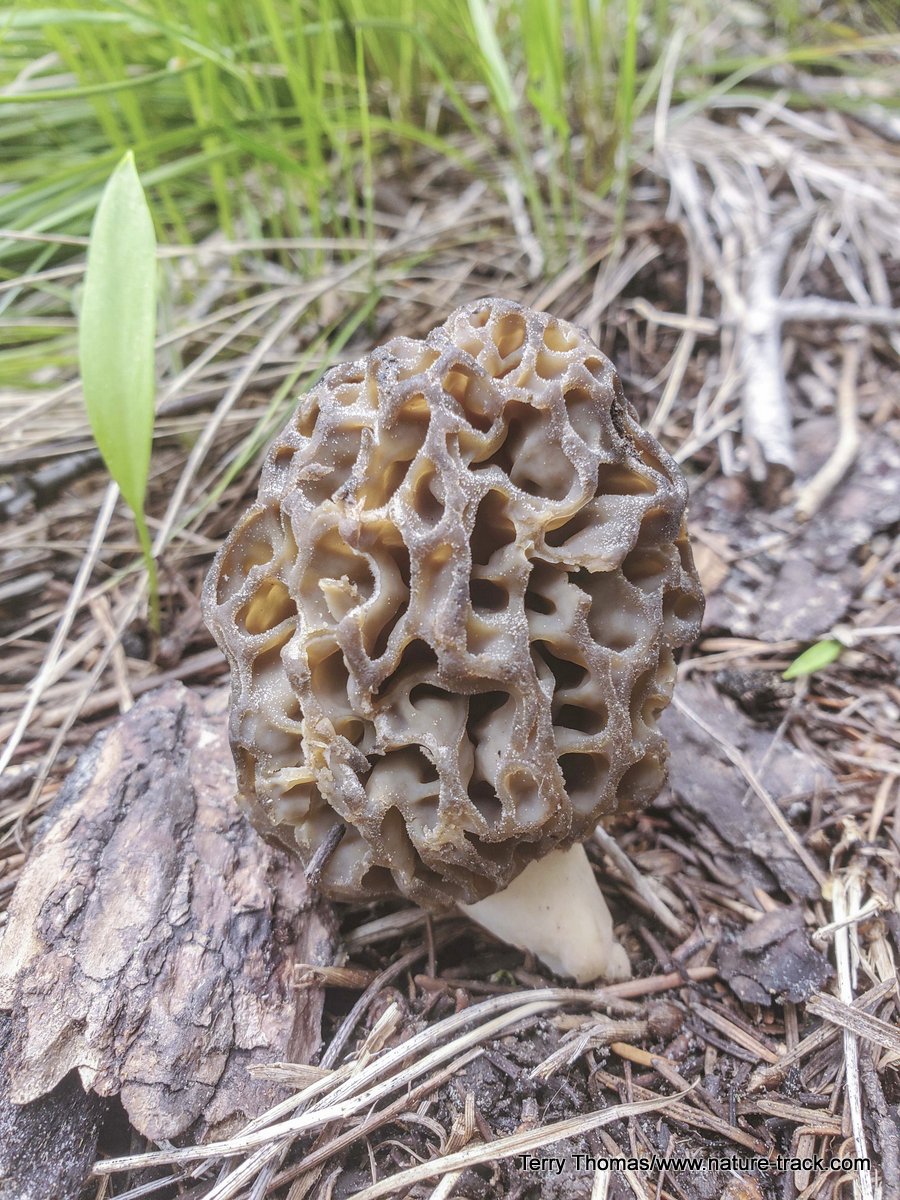 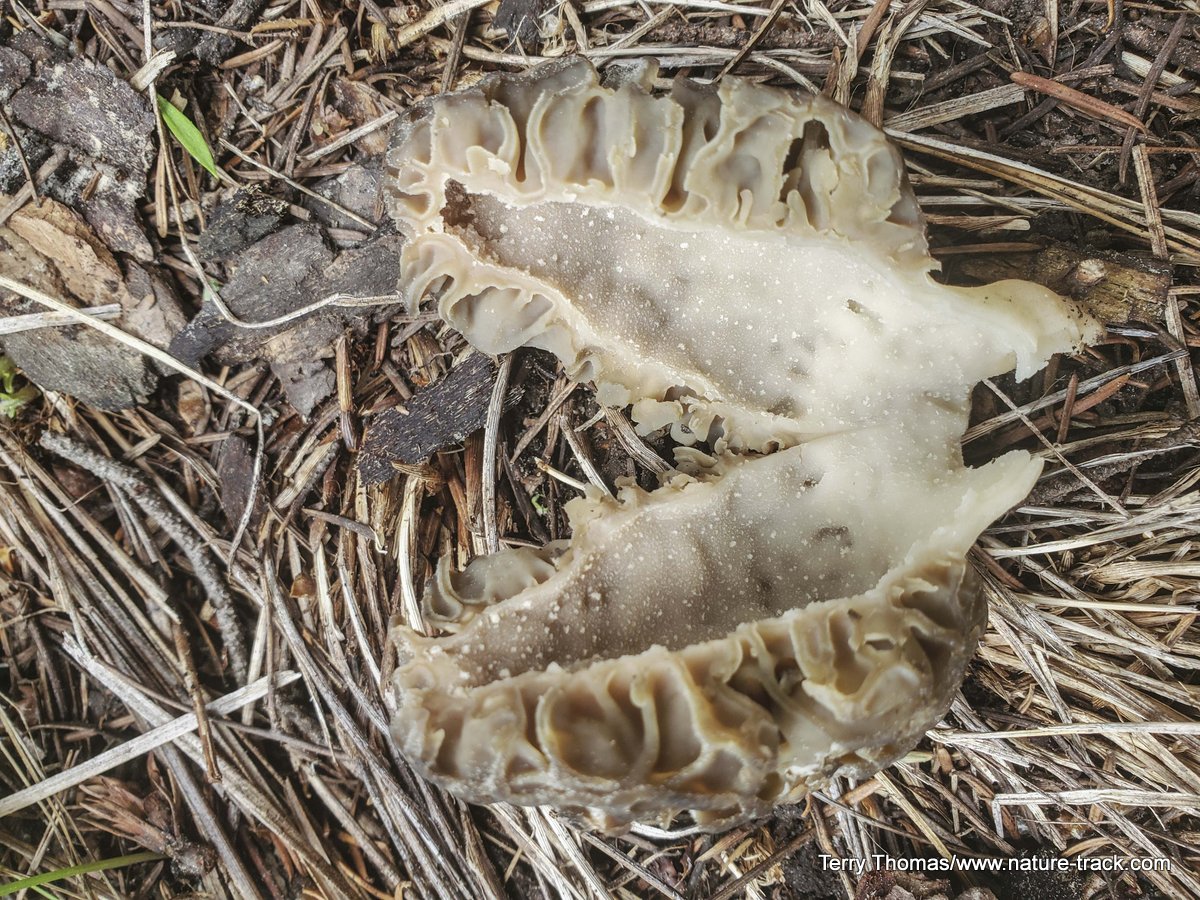 Morel mushrooms, morchella spp., are considered by many mushroom foragers as the pinnacle of mushroom flavor. The photo on the right shows the hollow center of a morel, a key diagnostic for identification.

I have seen giant puffball mushrooms in Idaho, but I didn’t know what I was looking at. I have always found them when they are fully developed and have had great fun helping them disperse their billions of spores by stomping on them to see the cloud of spores they produce. It never dawned on me that these were the same puffballs that foragers rave about.

There are a number of species of giant puffballs and all of them are edible. One found in the Rocky Mountains, including southern Idaho, is the Western Giant Puffball, Calvatia boonia. This puffball can get huge, but is best harvested when younger.

Puffballs look like large round or oval blobs. The outside can be quite variable though so the secret to identifying a puffball of any kind is to cut it open. It should be very white, solid and with NO gills whatsoever. There is one look-alike, the deadly amanita, that hides its gills when young and you have to cut it open to see them, down near the stem.

As puffballs age, they begin to turn yellow or green inside. These are past their prime and will cause severe gastrointestinal distress if eaten.

Puffballs can last several days if refrigerated, but leaving them on the counter will cause them to rot into a stinky mess quickly. There are lots of recipes on line for how to use puffballs, how to freeze them and how to dry them. I found this one, https://foragerchef.com/puffball-mushrooms/, interesting and it has a lot of good advice on how to prepare puffballs.

Puffballs can be found anytime during the summer and fall. They tend to prefer open fields and disturbed sites, likely places where their spores have a better chance of developing. They feed on dead organic matter, but unlike chicken of the woods mushrooms, they do not live on living or dead trees.

Finally, the king of all mushrooms, is the morel, morchella spp., of which there are at least 45 species worldwide, with another 35 or so that taxonomists have yet to agree on. It is so popular that there is even a National Morel Mushroom Festival, held every spring for the past 100 years in Boyne City, Michigan. This mushroom is so prized that a pound of dried ones may cost $200.

It seems fitting that this gift of the woods should be easy to recognize and it is. To me, the morel looks like something out of a Lord of the Rings movie. Its cap is long and often triangular-shaped with an irregular honey-combed appearance due to an uneven network of ridges and corresponding pits.

Morel foraging season is a short springtime-only event. As soil, about four inches below the surface, warms to 55 degrees F., morels begin fruiting. This only lasts until soil temperatures reach 62 degrees F. That makes the timing somewhat variable, but mid to late May is likely close to an average. The photos above were taken on June 5, in Island Park.

There are some morel look-alikes so paying attention to detail is still important, despite their classification as one of the “foolproof four.” First, morels are hollow, right down to the stems. Stem and cap appear to be one continuous unit. The caps of true morels are attached to the stem at, or near the base of the cap. Many look-alikes attach near the top of the cap.

One interesting fact about morels and most other edible mushrooms is that they can make you very sick if eaten raw or undercooked. And that is a good reminder that although the “foolproof four” are a great way to get started into mushroom foraging, education and the help of an experienced forager are still necessary. Again, foragerchef.com has some good suggestions for preparation and preservation of morels.

I plan to get brave this year and see if I can try some of the bounty the woods and fields have to offer in the form of mushrooms. Hopefully, I will be around next winter to tell about it!