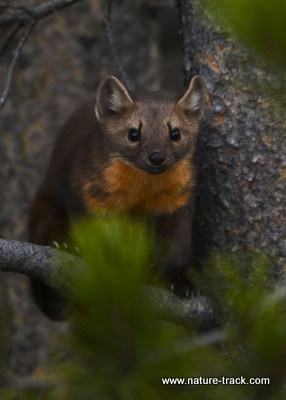 The American Pine Marten is a beautiful animal. The triangular face is at once intelligent looking and, well, cute as can be.

Fifty yards in front of our speeding car, a small mammal darted across the road and into the lodgepole pines on the other side. It was larger than a squirrel yet smaller than a raccoon. I jammed on the brakes and pulled to the narrow shoulder.

“Marten!” I exclaimed to my wife as she jumped into the driver’s seat and I grabbed for my camera. Cathy had never seen a marten before and while I had, I have never gotten a decent photograph.

As Cathy maneuvered the truck back onto the road, I took off after the marten, hoping that I could find it. When I entered the trees, I began making a squeaking noise by kissing the back of my hand, hoping to attract this curious predator. Sure enough, within seconds, I saw a small intelligent face peering at me from behind a nearby branch.

A marten’s face is triangular, with large eyes, pointed ears and perky nose. Just about anyone would describe a marten as cute, and the more emotional among us might say adorable. But there was nothing adorable about its guttural chattering. It was a primal sound, one I had never heard before and totally incongruous with its looks.

Like most I have encountered, this marten was unafraid and curious. It approached me several times, and then, after deciding I wasn’t a likely meal, just ignored me.

I ended up with a couple of usable frames before the search for breakfast led it away and I climbed back up to the road to intercept Cathy on her next pass down the road.

Seeing a pine marten, officially known dually as the American marten or American pine marten, is a rare treat. It isn’t that martens are rare. They are common in mature forests from Alaska to New England and down to the Sierra Nevada and Rocky Mountains. Martens are challenging to see because, like many predators, they cover a lot of territory. A male may cover six square miles. And marten territory is three dimensional, as they spend much time searching for squirrels, eggs, birds and more in the trees.

Martens will eat practically anything, living or dead. Squirrels may be preferred, but chipmunks, hares, rabbits, mice, voles, carrion and even nuts are on the menu.

Marten are actually easy to recognize. They are members of the weasel family and have the typical weasel-like long slender body. A long bushy tail gives them a total length of 21-26 inches. Their rich silky fur is medium brown, darker on legs and tail with a buff chest patch.

While you might not see a marten, you may find their tracks as they are active all winter long sustaining a metabolism that requires constant fueling. Their large tracks are easy to recognize: up to one and three-quarters inches wide, they have the customary five toes of a weasel (members of the dog and cat families have four toes). In snow, they have a bounding gait, much like a squirrel but longer.

In my wandering last weekend, I encountered another marten. It responded to my hand kissing by coming closer and standing up on its back legs for a better look. I don’t know what it thought of the encounter, but it made my day.