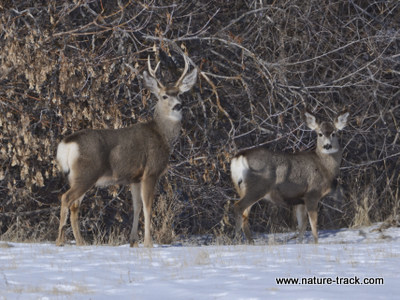 During the winter, deer are natural browsers. For them to switch to a diet of hay can be deadly if it happens all at once.

Haystacks are a great attraction to big game animals and it seems that every rancher has a story about mule deer that fed at their haystacks and were soon found dead with stomachs full of hay. This leads to the conclusion that deer cannot digest hay (alfalfa) and that feeding deer hay will kill them.

This isn’t true, but it takes a bit of understanding of how deer digestion works in order to explain why deer sometimes die with bellies full of hay.

Deer are particular eaters. Unlike elk that can eat and process rough grasses just like cattle, a deer’s digestive system is not able to process coarse foods fast enough. Deer select tender grasses, forbs, leaves and flowers that are lower in cellulose content for the mainstay of their summer diet. These can digest quickly in the four-chambered stomach of the deer with the aid of microorganisms in the rumen.

The microorganisms in the gut are responsible for most of the digestion. The deer consumes the food and later chews the cud in order to pulverize the food particles but the tiny organisms actually digest it into useful nutritional products for the deer.

As fall approaches and the deer’s diet gradually shifts more to browse (brush) the microorganisms that digest this food source begin to increase. As leaf and forb intake declines, the commensurate microorganisms fade to background levels. So, there is a shift of microorganism colony dominance.

That is the crux of the can/can’t eat hay dilemma. Which colonies of microorganisms are dominant at the time? In mid-summer when the numbers of leaf digesting microorganisms are high, deer could live exclusively off alfalfa hay, dried or fresh. Even later in the fall, if a deer could eat just a little hay each day for a week, the colonies of leaf/forb digesters would expand and ultimately, the deer could thrive on hay.

The trouble happens when a deer comes to a haystack after having been on a diet of browse or near starvation and gorges on hay. There are not enough of the right microorganisms to process the hay and the entire digestive system gets corked. By the time the microorganisms can organize and reproduce to take advantage of the bounty, the deer is dead.

Native forage that deer have survived on for eons is clearly the better answer to the question of how to feed deer.