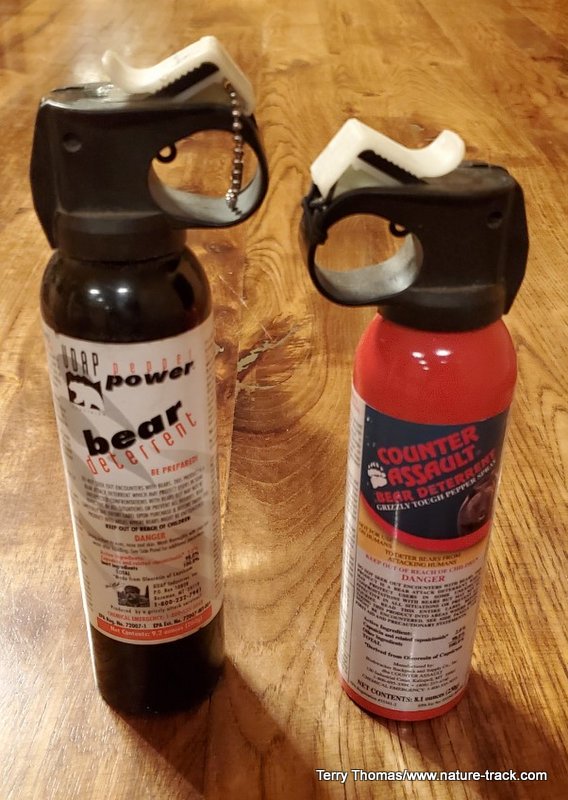 These are two popular brands of bear spray and contain around nine ounces of spray. I prefer the larger 10.2-ounce size and often carry two cannisters.

I was standing well off the side of the Going to The Sun road in Glacier National Park working on a photographic composition several weeks ago. Suddenly, I smelled a strange odor and at the same time began to cough uncontrollably. I knew instantly what had happened. I turned and noticed a couple just closing their car trunk and heading across the road. Once on my side, I asked them if they had discharged bear spray. The fellow immediately pointed to his companion and exclaimed, “she did it!” Apparently, she had knocked off the safety getting out of the car and then bumped the trigger, releasing a short burst that carried across the road to me.

Bear spray is a generic term for a defensive weapon developed to help deter bear attacks. It is derived from hot red peppers and the active ingredient that bears find so disagreeable is capsicum. Bear spray is regulated by the EPA as a pesticide (humorous if you ask me) and the maximum allowed concentration is two percent capsicum.

Does bear spray work? Let me give you a personal experience with a similar product developed for law enforcement work. At one time, I was trained as an instructor in the use of what we call pepper spray. Each instructor was sprayed with the stuff for a better understanding of what to expect from it. That was a memorable experience. The pain and incapacitation were almost instant and despite repeatedly dunking my head in a bucket of water, the effect lasted for about 15 minutes. In short, it worked.

Carrying and knowing how to use bear spray in grizzly country is beyond prudent. However, the spray will deter any animal attack from mice to moose and after watching the U-tube video of the jogger’s encounter with a momma mountain lion 2 weeks ago in Utah, I have resolved to carry it all the time, grizzlies or no.

Here are the basics to remember with bear spray:

·        It is a loaded weapon. Treat it with respect. Don’t just toss your can on the backseat and pile other gear on top or set it in your windshield where the heat might cause it to explode. Experts recommend that you put the cannister in a closed container for transport, especially if in the cab of the vehicle. Be sure the safety is always engaged.

·        You cannot do as one father did, and apply bear spray to your child like insect repellent. It doesn’t work that way. Don’t spray on tents either as it might actually attract bears.

·        Practice. You can purchase inert cans of spray or use an expired can (a can “expires” after four years) to see how far it will spray, how the spray behaves in wind and how long a can lasts. A large 10.2-ounce can should give you about eight seconds of spray.

·        Practice drawing it from the holster and removing the safety. If a bear charges, you have an average of about two seconds to deploy the spray so speed counts.

·        Give your can a shake or two whenever you use it to ensure contents don’t settle.

·        If attacked, spray in front of the bear so it will run through a wall of spray. The spray pattern doesn’t require pinpoint accuracy. That is one reason it is better than a firearm.

Some experienced hunters still argue that bullets are better than bear spray. However, a publication from the US Fish and Wildlife Service indicates that research on bear attacks proves, “a person’s chance of incurring serious injury from a charging grizzly doubles when bullets are fired versus when bear spray is used.” Stick with bear spray. It could save your life.