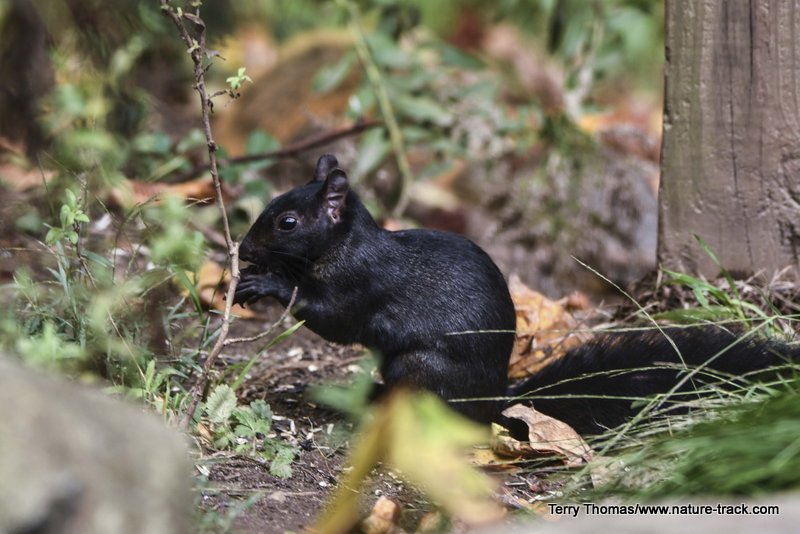 This melanistic gray squirrel was playing around a bird feeder in Wisconsin. The first time we saw one we thought it was quite rare. However, it seemed every woodlot had its contingent of black squirrels.

I was returning from Boise via Craters of the Moon one November afternoon several years ago. A few miles from Arco, I noticed three mule deer in the field alongside the road. It wasn’t an unusual scene and I barely glanced at them as I drew closer. But when I realized what I was seeing, I couldn’t get the truck stopped fast enough. The doe and one fawn were typical enough, but the other fawn was coal black.

By the time I got stopped and back to the deer, they had disappeared, leaving me holding my camera and dismally shaking my head. Another once-in-a-lifetime photographic opportunity lost. I have since seen photographs of black mule deer, but I don’t have one of my own.

Solid black individuals in populations that are otherwise colored, is unusual, to say the least. It is called melanism and is basically the opposite of albinism, animals that lack any skin and hair pigmentation at all, yielding an all-white, pink-eyed animal.

In melanistic individuals, the dark pigment in the skin and hair, melanin, is turned up to high, overpowering normal pigments. It is interesting to note that depending on the species, this is the result of dominant or recessive genes. For instance, melanism in jaguars is conferred by a dominant allele. In the African leopard, it is a recessive allele. Both are called black panthers though and both are gorgeous cats.

In the east, where we just returned from, there is a melanistic form of a gray squirrel. These look a bit like small black housecats at first glance. These squirrels are quite popular, even where gray squirrels are less appreciated, and can be found throughout gray squirrel range.

Albinism is generally a handicap, making the individual easy to spot and kill. Melanism though, can have ecological advantages and it is easy to see why it may be retained genetically in a population. We all remember the story from high school biology of the pepper moth in Great Britain. As industrial pollution increased and blackened tree trunks, the melanistic form of the pepper moth became dominant as it blended better with the new reality of soot-covered trunks. As pollution tapered back off, the lighter form was favored and increased. Overall, the population survived the changes in the environment because of the “mutant” gene producing melanism.

The same is true for the gray squirrel. Some scientists believe that the black phase of squirrel was dominant before the virgin forests of the east were removed with settlement. The thinking is that these black animals were much better camouflaged in the deep dark forests than their gray brothers and sisters. When the forests were removed, the gray version gained the upper hand in the lighter brighter forests.

The diversity of nature always amazes me and it is a reminder that given a chance, nature can find a way. I just hope I am ready with my camera the next time I see it.