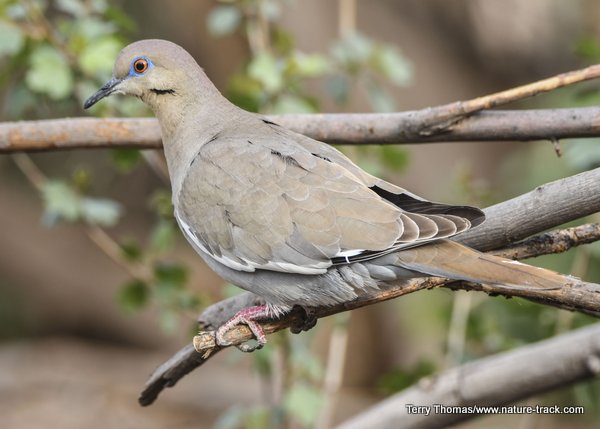 A white-winged dove, with the white edge of the wing plainly visible, sits on a branch in Arizona. They are one of at least five dove species in Arizona.

We were looking at a dove in my dad’s backyard near Yuma, Arizona. At first, I thought it was a mourning dove, then deciding it wasn’t, I looked for a collar on the back of the neck that would make it a Eurasian collared-dove. Then I finally saw the white edges of the wings and recalled another dove we have seen in Arizona in the past, the white-winged dove.

In Idaho, our choice of doves is usually limited to the first two species I thought about. With the pointy tail of the mourning dove and the broad, fan-like tail with a white stripe of the Eurasian collared-dove, the choices are pretty easy. Such is not the case in Arizona. Besides the white-winged dove, last year we identified the tiny Inca dove that some people mistakenly refer to as a baby mourning dove, and the common ground dove as well as the Eurasian collared-dove and the mourning dove. Had we pushed west to Los Angeles, we might have seen the introduced spotted dove as well.

Doves are members of the bird family Columbidae which is the exclusive lineage of doves and pigeons. It is also the only family in the order, Columbiformes, making them pretty unique in the bird world.

While Arizona outshines Idaho in species of doves, doves and pigeons occur worldwide. The bulk of the species can be found in India, and across southern Asia to Australia. But with 344 species in the family, one can expect a lot of variability. The doves we have seen belong to three different genera: Zenaida, Columbina and Streptopelia.

Members of this family are usually described as stout-bodied with short necks and bills. Most are handsome birds. In English, dove is the name given to the smaller species and pigeon to the larger, heavier species and a group of doves is called a, “dule” (pronounced, “dool”) after the French word for, mourning.

By far, the two most common doves in the United States are the mourning dove, with an estimated population of 350 million and the Eurasian collared-dove with uncounted millions. There may be several reasons for their success. First, both species have benefitted from human expansion and farming. Second, they are both long-lived species with the record known age for a mourning dove being 30 years and that for a collared-dove over 13 years. Finally, both species are capable of raising up to six broods (usually two nestlings per brood) a year in good habitat.

Like other doves and pigeons, both parents use crop milk to feed nestlings. Crop milk is a secretion of the cells of the esophagus mixed with partially digested seeds. This means that the parents don’t have to rely on specific foods such as insects to feed their chicks and this extends their breeding season.

For me, mourning doves announce the beginning of the summer season. I am always glad to see them back around home. Any other doves are welcome too.