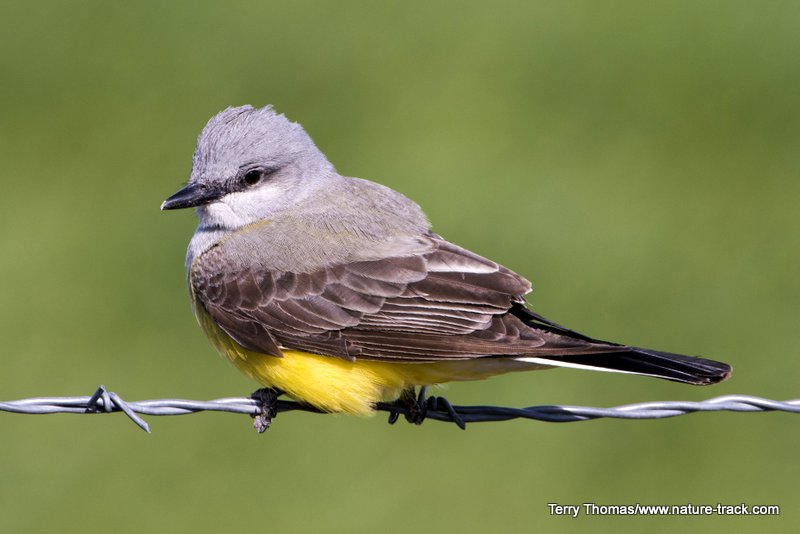 The Western Kingbird is a large and lovely flycatcher native to all of the West in the right habitat.

One of my, “duties as assigned”, with Friends of Camas National Wildlife Refuge is to write the column entitled Bird of the Month for the website (friendsofcamas.org). Winter is a tough season for this column as I like to write about birds that can actually be seen during that time and I have exhausted most of the winter birds. So, I am thrilled that spring is here and once again, I have a plethora of birds from which to choose.

Among a wide palette of birds that will just get bigger as May advances, I chose to write the Bird of the Month about one of my favorite birds, the Western Kingbird. It is a favorite for many reasons—it is native, easy to recognize, beautiful, fascinating to observe, is relatively common and actually breeds in our area, unlike so many of the songbirds you might see this month.

Kingbirds, and there are seven species in the U.S., are members of the tyrant flycatcher family. As such, they share the flattened, broad-based bill and exceptional flying skills of other flycatchers. Like other flycatchers, they are predators, hunting insects on the wing. Some kingbirds, including the Western Kingbird, also have a tiny hook at the tip of their upper bill, a trait not shared by all flycatchers.

While most flycatchers are small, averaging 5-6 inches, most kingbirds are significantly larger, up to 10 inches in length and twice the weight of an average flycatcher such as the Dusky-capped Flycatcher. The Western Kingbird is about 9 inches long and weighs about an ounce and a half.

The Western Kingbird has a gray head and back and a lighter gray chest. Dark wings separate these from a lemon-yellow belly. The dark tail has a thin white stripe on each side. The eye, feet and the bill are dark. There are three other species of kingbirds with yellow bellies, but their ranges don’t overlap in our area.

Western kingbirds range from the Pacific coast to the prairie states and from southern Canada to northern Mexico. Within this range, they are common in open habitats below 7,000 feet a.s.l. that have lots of trees, shrubs, fences and powerlines from which they can launch their aerobatic hunting attacks.

Western kingbirds are a species that seems to be benefitting from the human-caused changes to the landscape. As more trees, shelterbelts and fences appeared in the mid-west, and as forests were cleared, Western kingbirds expanded their range eastward. Many Western kingbirds have wintered in Florida for 100 years.

With a genus name of Tyrannus, and a common name of kingbird, you might expect that these birds are a bit feisty. Males establish territories early and when they pair up, defend these territories with energy and style. The males use a harsh buzzing and whir their wings at intruders. Both sexes snap their bills and raise their red crowns (much like a Ruby-crowned Kinglet, these are normally hidden under feathers on their heads) when provoked. They will take on intruders far larger than they are, often driving off red-tailed hawks and kestrels.

Whether for the Post Register or for the Friends of Camas NWR website, it is great to write about a native species that is doing well and one that can be a lot of fun to watch.