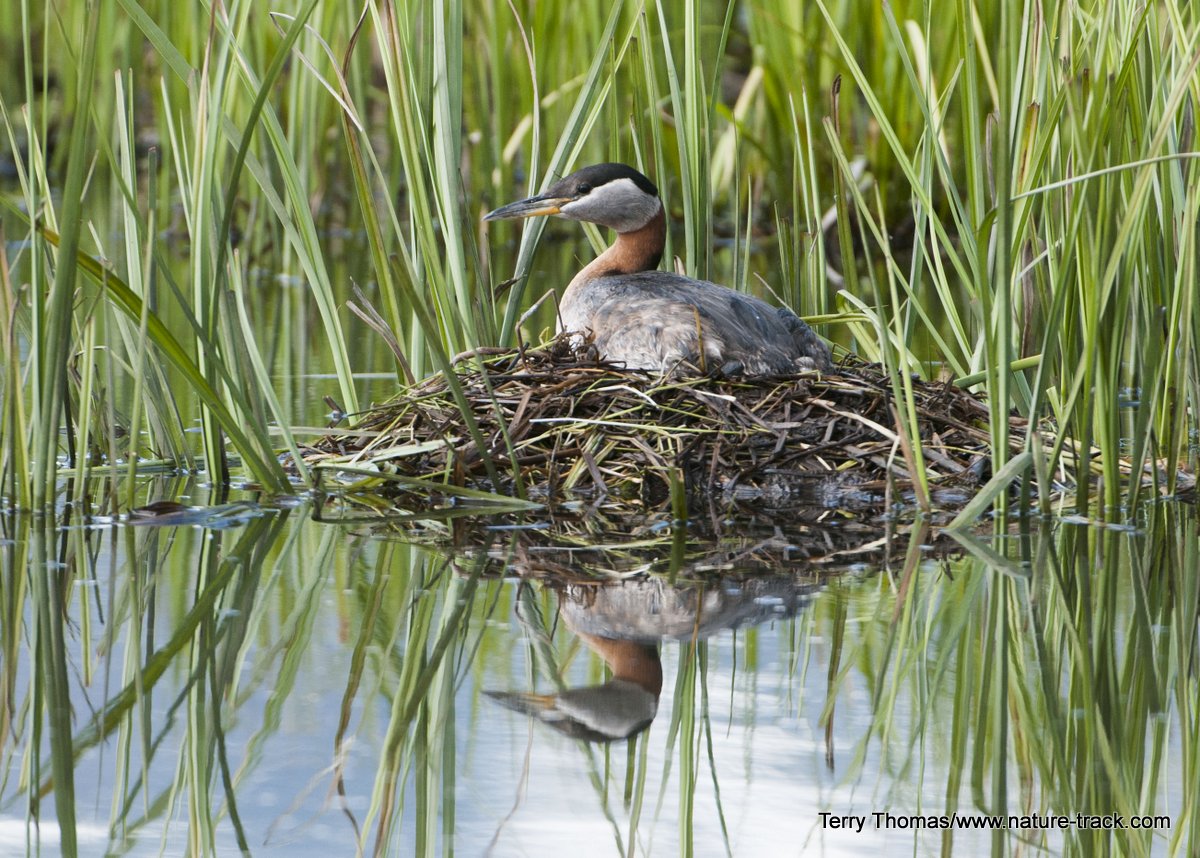 It is a rare thing to find a nesting red-necked grebe in Idaho. We are fortunate to have several pairs nesting in Island Park.

As soon as the ice on Silver Lake in Harriman State Park melted several weeks ago, migrating birds began to pour in. Hundreds, if not thousands, of birds of many species have been using the lake as a stepping stone while other waters such as Island Park Reservoir and Henry’s Lake remained locked in ice. Ring-necked ducks, common loons, eared, pied-billed and western grebes, American white pelicans, trumpeter swans, mallards, great blue herons, red-breasted mergansers, and more all plied the waters for energy to continue their journey or looking for a spot to rear their family this year. Among them was a bird rarely seen in Idaho, except during migration, the red-necked grebe.

These handsome birds have spear-like yellow bills (or black with a yellow base), black crowns and silvery gray cheeks sometimes separated from the crown by a thin white line, and the namesake brick red necks. Males and females are similar.

On the lake, they called repeatedly back and forth to each other. They were clearly the most vocal birds on the lake. This mating behavior seems a little premature given that most red-necked grebes summer in Northern Canada and Alaska and thus have quite a journey ahead of them before mating can occur.

However, there is an exception and it occurs right here in Eastern Idaho. There is a small group of red-necked grebes that go no further than Henrys Lake to nest. In 2010, when I made the image that accompanies this article, I could find only the one pair. I suspected that there had to be more, but I could not find them. Last year, 11 years later, we easily found red-necked grebes in several locations and on different days. That suggests that the population has found Henrys Lake to its liking and is continuing to expand.

Red-necked grebes are much larger than pied-billed and eared grebes, with a longer bill and neck. They are a bit smaller than the commonly seen western grebe. Otherwise, they are much like our other grebes. They sit low in the water, sport legs far back on the body and dive for fish and other prey. Sometimes, like loons, they will hunt by submerging their heads and scan for prey.

As visual predators, they require relatively clear water. They also prefer shallower lakes where they can hunt the entire water column, and that makes Henrys Lake, with a reported maximum depth of 23 feet of clear water, perfect. They also require some shoreline with emergent aquatic vegetation for nesting and that habitat is abundant on the west side of Henrys Lake.

Nest building is accomplished by both the male and the female and consists of a bulky floating platform of reeds and cattails. Nests can be large, averaging 44 inches across. The female will lay a clutch of up to nine light blue eggs. When the chicks hatch, they are covered in down and active. They are able to swim, but usually spend much of their first two weeks atop a parent’s back. This must look pretty comical when there are nine chicks.

Red-necked grebes are currently listed as species of least concern by the International Union for Conservation of Nature (IUCN).  That is good news and means that populations of red-necked grebes are stable or possibly even increasing and perhaps my great-great-great grandchildren will have the opportunity to see them as well. In the meantime, now that the ice is off Henrys Lake, I think I will go see if I can find a red-necked grebe.