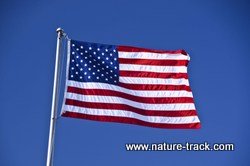 It only takes just more than a breeze to get a flag to fly. If a wind is hard to walk against, it likely  is almost gale force, exceeding 30 mph.

Winds racked an otherwise perfect weekend, buffeting trees, capping waves with white froth and churning clouds of dust and pollen that mocked my strong over-the-counter allergy medications. Once again, I fumed, the winds of East Idaho, which according to the weather report were 33 mph and gusting to 46 mph, had thwarted my plans.

Wind is a part of life here in eastern Idaho, but in reality, Idaho isn’t all that windy. In fact, we don’t even make the top ten best states for the development of wind energy. North Dakota gets top honors, and our neighbor, Wyoming, is number seven.

Of the windiest cities in the nation, again, Idaho cities don’t even get an honorable mention. Dodge City, Kansas, is the top of the pile for the United States, but even then ranks a lowly fifth place worldwide. The windiest city in the world is Wellington, New Zealand which has an average daily wind of 18 mph and 120 days with winds of 36 mph. One third of their year is like last weekend. That’s great if you are a windsurfer, I suppose.

Mount Washington, New Hampshire, likely holds the record as the windiest place on the continent with

sustained wind averaging 35 mph. Until 1996, it also held the record for the highest recorded wind ground speed of 231 mph.

It is clear that although I complain, things could be worse.

Some places might be windier than others, but wind is a fact of life on this planet largely because of the daily uneven heating of the earth’s surface by the sun. For instance, water warms more slowly than black rock. As air warms over the rock, it rises faster than air over the water. Cooler air falls, always moving from atmospheric high pressure to low pressure, and this motion is wind.

You might think that a world spinning at 1,040 miles an hour would be windy indeed. But the rotation of the earth doesn’t cause the wind; it only influences its’ direction through what is called the Coriolis effect.  In the northern hemisphere the Coriolis effect “bends” the wind in a clockwise direction, resulting in westerly winds or winds from the west.

Wind shapes the earth. Many of our richest soils in eastern Idaho are wind-blown loess, very fine particles that settle out miles from where they are picked up. The sand dunes at St. Anthony were formed from sand blown in from Mud Lake, Market Lake and the Snake River Plain.

Wind brings the rain, moderates temperatures and circulates ocean currents that keep the huge planetary climate engine running. Wind is so important in our lives that I should quit complaining about its inconveniences. A world without wind would be uninhabitable.