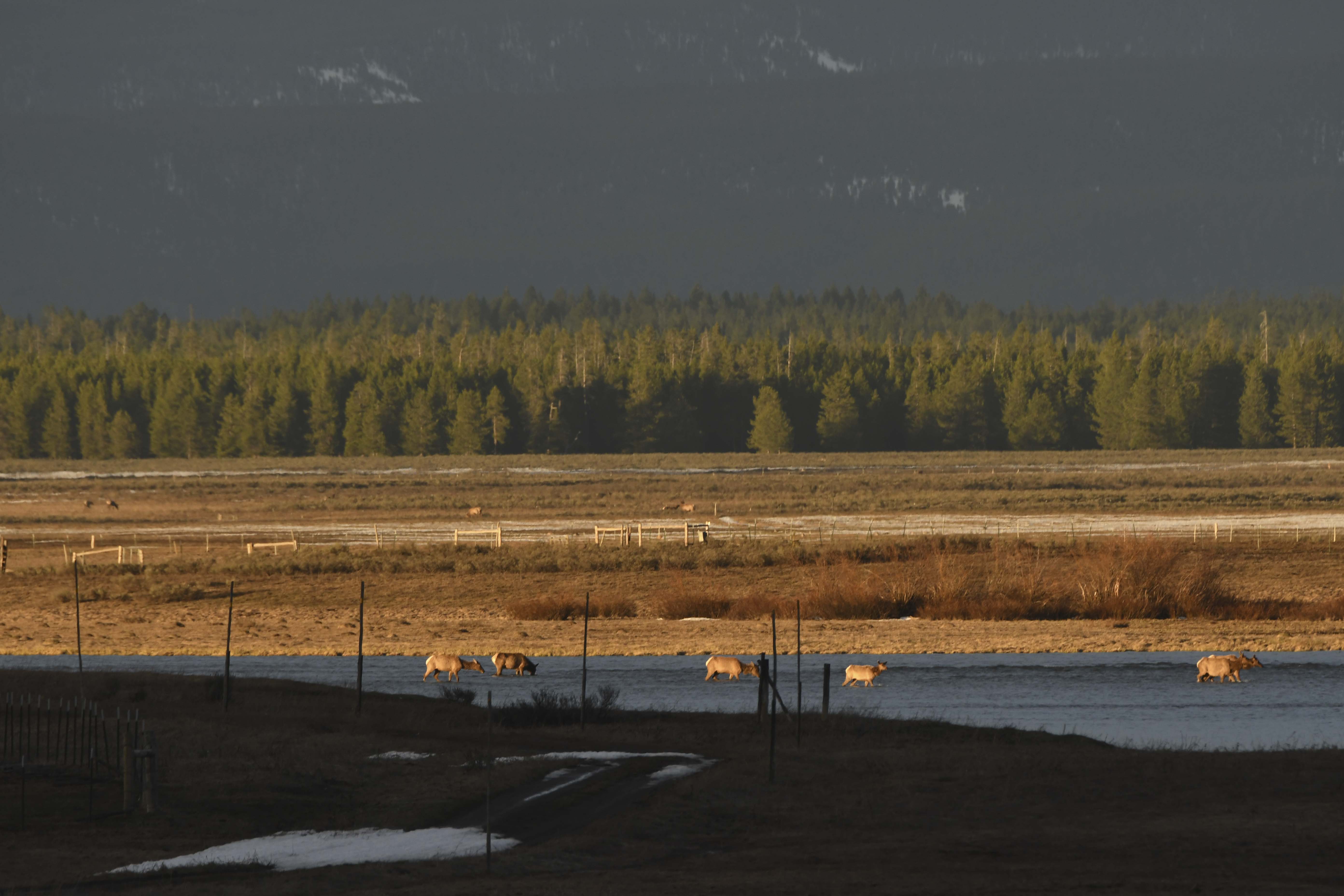 Elk move across Harriman State Park with a single focus determination to reach their calving grounds as soon as possible.

We saw our first elk of the season in Island Park one week ago. We were watching trumpeter swans on the far western shore of Silver Lake at Harriman State Park when my wife suddenly exclaimed, “there’s an elk!” One elk turned into 30 or more as we watched them work their way north and out of sight. When we moved to the parking lot and started on the walk to the ranch, we realized that the meadow beyond the ranch also held elk, about 175 of them, all moving north toward Last Chance and eventually wading across the Henrys Fork.

Now is the time for elk, mule deer and pronghorn to be on the move. After a brief period in the spring when they actually might move south to take advantage of greening grass lower down, these big game animals begin to push the snowline as they move to summer ranges in higher country. With the favorable conditions at lower elevations, one might wonder what the hurry is. Why not slow down and take their time like they do during fall migration, where they may only move when forced to by weather?

For big game, the answer is pretty simple. May and June are the calving and fawning months and mothers are hoping to get to their traditional birthing areas before the big event. There are several good reasons for this. First, the mother is most familiar with the resources and the terrain. She knows where to hide her calf or fawn so that she can still watch it from afar while she grazes. In familiar ground, it is also easier to spot predators that might want to make a meal of her youngster.

With migrating birds, spring migration is also a hurried event. In their case though, the race to summer homes is to secure breeding territories. With many species, males migrate before females in order to work out their differences with their neighbors before the ladies arrive. With territories decided, males can concentrate on wooing the females. Females can’t dawdle though. Though sometimes in less of a hurry, the females still have the big job of selecting a nesting site and getting a clutch of eggs laid so the process of raising a family can begin.

For some species, especially some waterfowl, the peak of the migration season through Idaho has already passed. Snow geese, for instance, made their Idaho debut in March, just as local marshes were melting out. For other birds, songbirds in particular, migration peaks in late May. Birders often state that at Camas National Wildlife Refuge near Hamer, Memorial Day weekend is the best time to see multiple species.

Shorebirds are also pushing the winter frontier. They are among the world’s greatest long-distance travelers, some going between the Arctic and Central or South America each season. They may only be in our marshes just long enough to catch their wind, then off they go. Recently we saw long-billed curlews on the Flat Ranch in Island Park and black-necked stilts, avocets, white-faced ibis and willets at Market Lake WMA near Roberts.

I have written a lot about migration because the topic fascinates me and migration is one of the best times to see lots of wildlife of all kinds. With migrating big game though, drivers should use extra caution. Animals can cross highways anywhere and a collision with one can ruin your day.