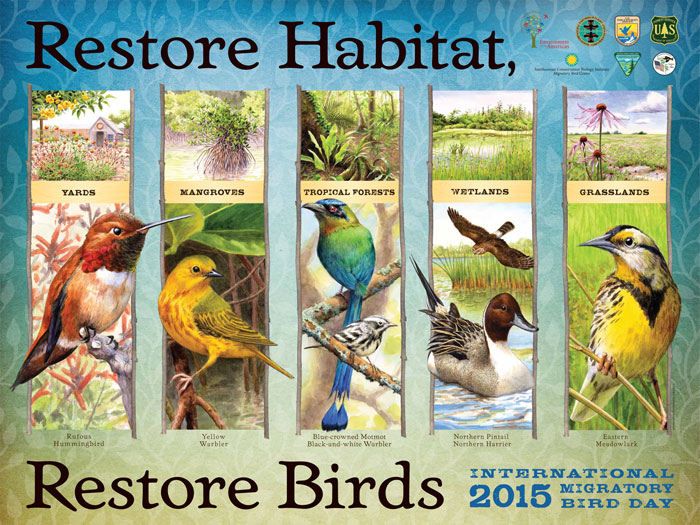 Restore Habitat Restore Birds is the theme of the 2015 International Migratory Bird Day Celebration. Check out activities in the greater Idaho Falls area at: http://www.nature-track.com/nature-blog.html. If you live in the Salt Lake area, there is an entire week dedicated to the event. Check out the activities at this website: www.greatsaltlakebirdfest.com/welcome.php.

There are a total of 52 presidentially declared awareness days, 18 official weeks and a whopping 51 declared months. Most months are like April and May, serving as the focal period for numerous important events. Add to that family birthdays and anniversaries and the opportunities to party are nearly endless but remembering it all becomes problematic.

So, I hesitate to add to the burden we all face in trying to remember if Leif Erikson Day is held in May or October by stating that Saturday, May 9, is the official day celebrated as International Migratory Bird Day (IMBD) in the United States. I must further add to the confusion by pointing out that since songbird migration peaks in late May in Eastern Idaho, we choose to celebrate International Migratory Bird Day one week later, Saturday, May 16. Other locales may celebrate earlier or later depending on when migration peaks in their area. South of the border, the second Saturday of October is the official date.

Migration is celebrated internationally because birds don’t recognize political borders. A pintail duck may spend the winter in South America yet raise its brood in the Northwest Territories of Canada. Getting from winter to summer homes it passes over the countries of Central America and Mexico, crosses from four to six U.S. states and several Canadian provinces.

It is exciting to think that eastern Idaho plays a critical role in this multi-national event. While we do serve as breeding range for millions of birds, one of our most important roles is as part of a necklace of habitat pearls that long-distance migrants depend upon for rest and refueling. Without places like Market Lake WMA, Deer Parks WMA and Camas National Wildlife Refuge, getting from Central or South America to breeding grounds in the north would be impossible.

As far as I can determine, International Migratory Bird Day is not presidentially sanctioned. It was the brainchild of the Smithsonian Migratory Bird Center and is now coordinated by the U.S. Fish and Wildlife Service. It celebrates its 20th anniversary this year.

Each year IMBD has a theme upon which events may center. This year the theme is: Restore Habitat, Restore Birds. That seems so simple as to be a no-brainer, but then last year organizers felt the need to elaborate on the obvious with a theme of, Why Birds Matter.

For the past several years, the local event has been held at the Ducks Unlimited Market Lake Ranch just north of Roberts. This year will be similar with guided birding tours, the Teton Raptor Center show, and a class for beginning birders. You can get more information at: http://www.nature-track.com/nature-blog.html.