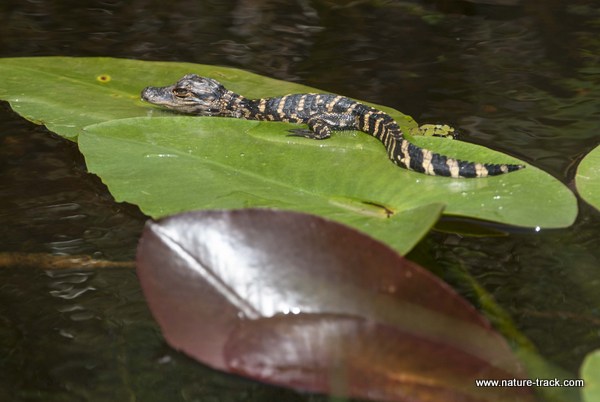 This baby alligator was being watched over by a very protective mother.


The baby alligator was just a cute 12 inches long. It rested on a green lily pad, its yellow and black skin in sharp contrast. It was a great photo, one that could be even more amazing if I could get a little closer and perhaps shoot from eye level. I began to make my stealthy approach when movement across the small canal caught my eye. About 15 feet away, a large green adult alligator, a good and watchful mother, lay on the bank, staring at me with unblinking eyes. I was a little slow on the uptake but realization dawned on me. Mother alligators guard their youngsters for over a year. I slowly backed out, suddenly more than content with photographing from the bank at a less than ideal angle.

As humans, we like to judge motherhood strategies as good or bad based on the way humans raise their young. In reality though, it isn’t about good or bad, it is about survival and there are hundreds, if not thousands of strategies that nature’s mothers use to help their youngsters persist in the real world.

Mothering reaches its pinnacle with humans, where the process may last 20 years and include teaching complex skills and ideas such as morality. To lesser degrees, we share this with apes, elephants, orcas and a number of other species that care for their young over years while teaching them involved skills.

But motherhood strategies run the gamut in nature. At the lowest end is the love them and leave them strategy. Horseshoe crabs and yellow perch, for instance, seem to haphazardly cast fertilized eggs where predators can easily catch a free meal. This is the tactic of overwhelming numbers. Even when the predators are satiated, there are still eggs available to hatch.

Giant octopus mothers have a very dedicated version of overwhelming numbers. They only have one clutch in a lifetime, about 100,000 eggs. They back into a cozy underwater cave and for six months protect the eggs, dying about the time they hatch.

You wouldn’t think to expect a real ingenious strategy among the amphibians, but the Costa Rican poison dart frog would prove you wrong. This mother carries each tadpole, usually six or seven in all, to a separate bromeliad nursery that holds rainwater. Then she deposits an unfertilized egg in each to serve as food for the developing frog. Further, she returns every couple of days to replenish the food supply, demonstrating memory as well as creativity.

For the majority of animals, raising young is an annual event, sometimes more often than that. As soon as the new generation is mature enough to fend for themselves they either move off on their own or are rebuffed by their mother. This isn’t poor mothering. This is how the mother can prepare for the next litter or clutch.

Animal mothers may care for their young for years, enlist the help of others, carry their babies in pouches, on their back or even in their mouth. They sometimes have to make hard choices and allow one sibling to die in order to ensure the survival of the other. They may abandon their eggs without ever even seeing their offspring. But regardless of the strategy, it has proven to work well for that species over time. That makes all of nature’s mothers good mothers.