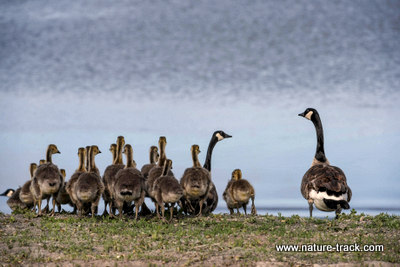 Canada Geese are prolific breeders and highly adaptable to human invention. Because of that, humans often have a love/hate relationship with this regal bird. By the way, the proper name is Canada Goose, not Canadian Goose.

This loss of four sub-species doesn’t really detract from the Canada Goose though. This is still an awesome and adaptable species that, unlike so many other wildlife species, has thrived under the domination of mankind.

The official 2015 bird survey estimates that there may be over five million Canada Geese in North America. They have found humans to be good neighbors and providers in just about every corner of the country, sometimes to the chagrin of city park managers, golf course pros, farmers and airline pilots.

Those seem like pretty disparate groups to stress over healthy numbers of Canada Geese. It is because geese get in their way. In city parks and golf courses, geese love the short green grass, grazing on it repeatedly to keep it short. That seems to be in line with park and golf course management goals and should save on mowing costs. The geese however, carry things a bit too far, converting this same grass into slippery feces that definitely isn’t consistent with grass management and human enjoyment of the same.

When the green grass is newly emerging grain, a large flock of geese can keep it short all summer long, preventing it from ever making grain. That clearly isn’t what the farmer intended when he planted the grain.

Airports and pilots? Canada Geese are so numerous around some airports that they are a hazard to aviation. A goose through a cockpit windshield or a flock of them sucked through a jet engine can really ruin a pilot’s day. In fact, it is likely that the flock of birds that caused US Airways Flight 1549, piloted by Captain Chesley Sullenberger, to crash land in the Hudson River in 2009 was a flock of Canada Geese.

Human changes to the habitat have even changed Canada Goose migration patterns. The southbound fall migration of geese once drew with it the close of autumn and the high flying northbound Vs heralded spring. Not so much anymore. Up to a quarter of the geese living today may not migrate at all. Many of the others now delay fall migration.

On the positive side, over two million Canada Geese are harvested by hunters each year. Even this heavy harvest rate doesn’t seem to impact numbers though.

I thought about all this as I wrote the Bird-of-the-Month post on Canada Geese for the Friends of Camas NWR website (www.friendsofcamas.org). This posting celebrates birds of all types and never sees birds as a problem (with the possible exclusion of starlings and house sparrows).

In Canada Geese we have a species with little threat of facing extinction, something everyone should  appreciate. Yet, when the Canada Goose gets in our way or becomes a perceived nuisance, we tend to treat it as a commoner, worthy of little respect or consideration, and persecute them for their cleverness and adaptability. Seems we should make up our minds about what we really want.