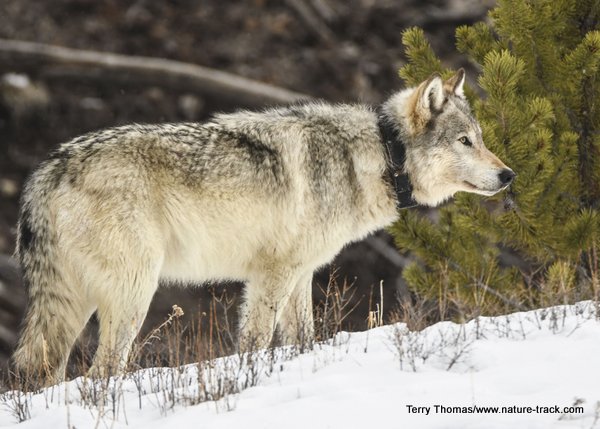 Take a good look at this wolf. It is going to get very hard to see a wolf in Idaho due to new legislation.

I barely had a year and a half under my belt as an employee of Idaho Department of Fish and Game when the Department celebrated its 50-year anniversary. In 1938, the citizens of Idaho overwhelmingly voted for the creation of a wildlife agency staffed with professional biologists and working under the guidance of a citizen committee that became known as, “The Commission”. This was to get out from under a system of political cronyism where appointments were made based on who a person knew and not professional qualifications. In short, it was to get politics out of wildlife management.

Twenty-five years later, I was still proudly employed by the Department when we commemorated the 75th anniversary. However, after Governor Little signed a bill several weeks ago that removes almost all constraints on wolf hunting in an effort to reduce wolf numbers in Idaho by 90 percent, there is far less to celebrate after 83 years.

As a recap, the new law, well supported by some Idaho hunters, the Idaho Cattle Association and Senate and House lawmakers, removes virtually all rules for ethical hunting, allowing hunting and trapping during all seasons, night shooting, aerial gunning, vehicular chase, no bag or daily limits and use of professional hunters and trappers. There are no holds barred in this assault on ethics and decency. Would we ever allow any of this for any other big game animal?

The goal is to reduce wolf populations down to the bare minimum that will still keep the Federal government from re-asserting control of wolf management—a dangerous game. Dangerous because two very different things can happen. First, the new legislation could be wildly successful and with no control on harvest, could quickly overshoot the magic number, triggering perhaps permanent federal intervention. On the flip side, wolves may prove harder to control, despite the ghastly methods now legalized, and the control effort could stimulate, not suppress, wolf production. This often happens with coyote control measures so it is a reasonable assumption here.

Part of the issue is that wolves eat elk, thus competing with hunters. Yet, elk hunters complained about elk numbers long before wolves were introduced. Ask an elk hunter how many elk there should be and, no matter how well the population is doing, the answer will be, “more”. Idaho has an estimated 120,000 elk and provides elk hunting opportunity other states can only dream of. Elk harvest averaged 19,759 elk annually from 2010-2019 with the last five of those years sustaining a harvest of over 20,000 annually, leading to the question, where is the problem?

Most elk zones are at or above population objectives established in the latest elk plan. There are several zones where wolves are the principal cause of mortality to a herd and are even suppressing the herd. But that isn’t everywhere and doesn’t justify such sweeping and unethical changes. The units in question are remote and difficult to access and reducing wolf numbers there will be much harder than in more open zones such as Island Park.

I served my first four years as a Conservation Officer in one of the elk zones in controversy and it was in trouble 30 years ago, not due to wolves, but to landscape changes to habitat. Wolves may be exacerbating the problem, but they are not the cause and fewer wolves won’t fix it.

However, this really isn’t about wolves. It is about politics taking over wildlife management. When politicians make the decisions instead of professionals, watch out. We’ve seen this on the federal level where western lawmakers have sought to have grizzly bears and wolves removed legislatively from protection under the Endangered Species Act. During the Trump administration, greater sage-grouse habitat protections agreed to under the 2015 Greater Sage-Grouse Plan were rescinded. What is next?

Idaho sportsmen and wildlife enthusiasts would do well to remember that not all wolves walk on four legs. With this foot in the door, this won’t be the last time state politicians and other influencers circumvent biology. Any wildlife that interferes with someone’s idea of making a living or recreation had better watch out—it may get legislated out of existence.

The Idaho Department of Fish and Game was established to eliminate exactly this kind of political meddling. I hope we can regain our senses and allow the Department to do its job without having to watch over its collective shoulder to see if what they propose is politically correct.