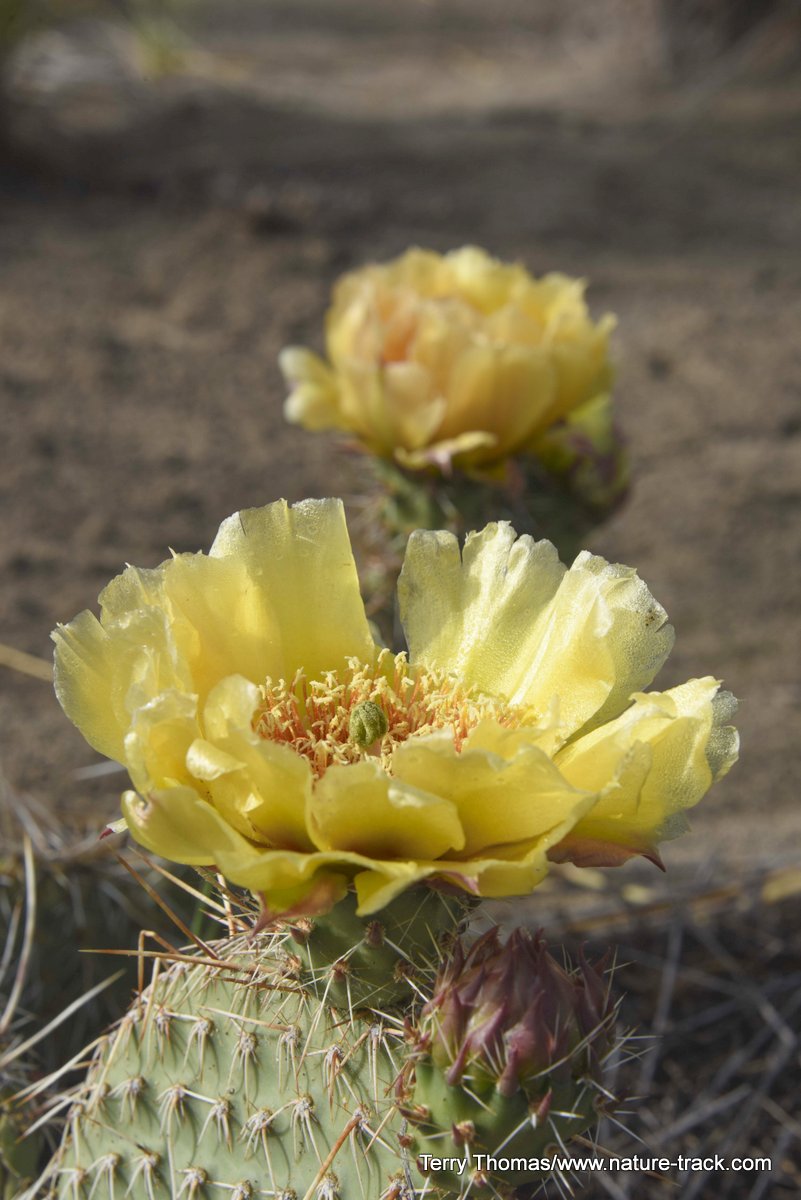 The plains prickly-pear has a beautiful flower that is worth watching for.

As I hiked near Tex Creek east of Idaho Falls, I tried to step gingerly through the sagebrush, but the sharp spines of the low-growing cactus easily penetrated the nylon outer layer of my boots, the waterproof lining and my sock, making me jump with pain and long for the days of all-leather boots.

Cacti (plural of cactus) are generally considered desert species, and indeed many species thrive in the Sonoran, Chihuahuan and Mojave deserts of the southwest. However, there are seven different species in Idaho, with several growing almost to treeline in certain areas. The most common cactus outside the true desert areas is probably, Opuntia polycantha, a.k.a., great plains, plains, panhandle or starvation prickly-pear cactus. The genus, Opuntia, is generally known as the prickly-pears and four of Idaho’s seven cacti are of this genus of cold-tolerant cacti.

Opuntia polycantha, I’ll just call it plains prickly-pear, is found from Texas and Oklahoma west to the Pacific and north well into several Canadian provinces. It prefers desert-like conditions and can be found in grassland, sagebrush and rocky habitats.

Plains prickly-pear is a relatively short plant, seldom exceeding 16 inches in height. It has green flattened palm to hand-sized stems and like most other cacti, is armored with spines an inch or more long. Besides these long spines, there are clusters of tiny spines called glochids. These are actually the more dangerous of the spines as they are small, easily dislodged and difficult to remove. And, they are very painful, possibly containing chemical irritants. This plant can create large areas where people and animals won’t want to travel in.

Plains prickly-pear has a storied history with humans. Native Americans depended on this plant for sustenance in several forms. First, the fruits, if prepared properly, are edible and tasty. A Forest Service website claims that, “The fruits or ‘tunas’ are cut in half and seeds removed. They resemble pomegranates in color, taste, and texture.” They can be eaten raw or prepared into jams and jellies and the seeds are edible as well. The pads or stems are also tasty in a number of ways. However prepared, it is always important to remove the spines and glochids, either by burning them off or cooking the pad then peeling back the skin.

Livestock operators are less enthusiastic about plains prickly-pear as it can actually thrive under drought conditions and continue to spread, reducing areas where livestock can forage without getting a snout full of needles. However, this propensity to expand under dry conditions is also considered a blessing of sorts. The cacti provide a refuge for grass and other native seedlings and when wetter weather returns and the cactus bugs and borers force the cactus to recede, grasses and other native plants thrive.

While plains prickly-pear seldom grows in huge patches in Idaho, in Texas and Oklahoma large stands of prickly-pear are used as a forage source during drought. Ranchers will burn a patch to remove the spines and glochids and their livestock will then readily eat it.

Over the next month, plains prickly-pear will be in bloom, starting with the lowest elevations. The flowers are large, yellow and with many stamens. That is a good, but clinical description. They are also strikingly beautiful and worthy of a prolonged look. Don’t miss the chance to see them.