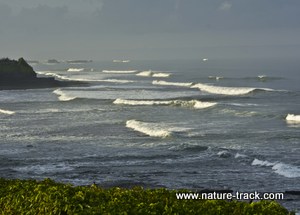 It is hard to imagine that events happening thousands of miles away in the Pacific Ocean can directly affect us here, but an El Niño weather pattern may be forming there that will do just that.

On my National Geographic map of the world, the vast South Pacific Ocean is so very far away from Idaho. It doesn’t seem possible that events in that great distant ocean could be anything more than just an interesting side note for the rest of the world. However, conditions are building there right now that may sway weather events for much of the globe.

El Niño, meaning the Christ child in Spanish, causes droughts and torrential rains, suppresses hurricanes in the tropical Atlantic Ocean yet generates cyclones in the east Pacific, and it may be forming right now, and it has its origins in the South Pacific Ocean.

In essence, El Niño is a warming of the Pacific surface waters. Trade winds normally push this warmer water from the east to the west, leaving cold water along the west coast of South America. The warmer water ends up near Indonesia. At some point, too much warm water piles up, literally two feet higher than the east side of the ocean, causing the trade winds to reverse. The warm water begins moving eastward. If it doesn’t make it past the mid-Pacific, there won’t be an El Niño. But if it reaches the coast of South America, weather patterns across the globe will change in a big way.

But El Niño is really a wild card and its effects are only broadly predictable because the interactions are so complex. There are variations in how one forms, how strong it is and how long it lasts, all based on complex relationships between ocean temperatures, climate and weather that scientists barely understand.

Although fishermen have been aware of the periodic warming seas for hundreds of years, it wasn’t until about 25 years ago that scientists made the connection between the warming ocean and the subsequent atmospheric events.

Climatologists now use a wide array of instruments in an equatorial area dead center between Indonesia and South America, called the Niño 3.4 Region, to measure ocean temperatures and determine if an El Niño is forming. When prolonged measurements indicate an average temperature rise in this region of at least 0.5°C (0.9°F) there is potential for an El Niño to form. A major event may see a rise in ocean temperatures of 3-4°C or more.

El Niño is not a new phenomenon related to climate change. This little boy has been creating mischief for a long time. There is strong evidence that conditions created by El Niño have been responsible for lost civilizations and widespread famines, and even played a role in creating the French Revolution.