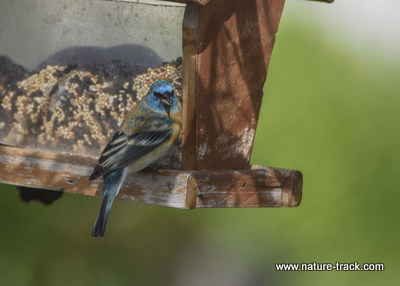 This Lazuli Bunting spent several days at my feeders taking a break from migration. Neotropical migratory songbirds will be flying across Eastern Idaho in great numbers over the next three weeks. Make sure you get out to see them.

Year-round, my bird feeders are a hotbed of social upheaval. Despite the fact that there is usually more than enough food to satisfy all visitors, the squabbles for domination are endless. This time of year, though, things get even more exciting as new species are briefly added to the mix.

I found that out this last week as I spent a little more time observing the feeders through my camera lens. While the species count is still modest, I saw half a dozen species that only visit my yard briefly during spring migration. Black-headed grosbeaks, Lazuli buntings, white-crowned sparrows, Western tanagers, Bullock’s orioles, cedar waxwings and more may use my backyard as a convenience store, stopping in for a quick bite before moving on. Occasionally, one will take a room and hang out for a few days of R&R and easy food, then move on.

These birds are called neotropical migratory birds. They spend up to two thirds of their year—our winter—in the tropical forests of Mexico, Central and South America (New World Tropics—hence the name: neotropical) and the islands of the Caribbean. During our summer, they breed in the United States and Canada.

The Neotropical Migratory Bird Conservation Act lists 386 bird species as neotropical migrants. These include many but not necessarily all species of shorebirds, ducks, woodpeckers, hummingbirds, hawks, herons, ibis and a host of other birds. One of the largest subsets is the neotropical migratory songbirds—including warblers, thrushes, finches, and sparrows—the birds most likely to visit your feeders.

A question you might be asking is: are these tropical birds that move north to take advantage of an abundant summer food supply or, are they northern birds that fly south to escape the rigors of winter?

Many North American songbirds such as vireos, flycatchers, warblers, tanagers and orioles have their ancestral roots deep in the jungles of the tropics. It is also clear that migrating birds have more young (almost twice as many) than their stay-at-home relatives in the tropics. It is easy to conclude then, that over time, these tropical birds pushed further and further northward to breed where they could take advantage of a seasonal abundance of insects and longer days, but returned home before winter approached.

Most neotropical songbirds pass through Eastern Idaho during the last two weeks of May and the first week of June.  Several factors contribute to this. First, the weather is generally more favorable for migration. Second, insect populations have grown to the point where they can sustain large numbers of birds. Third, these birds only have a few months to reach their breeding areas, mate and raise their families so they can’t come any later, especially when the journey back to the tropics begins as early as August for some species.

Most songbird migration actually occurs at night. It is likely safer then, but scientists believe that they may be using the stars for navigation. Regardless, each time you go for an early morning stroll, you could see birds that weren’t there yesterday.

Migration is dangerous for songbirds. More die during migration than at any other time. With this in mind, we can help them out right now by hanging out an extra feeder, adding several different kinds of foods and making sure there is clean water available. In the longer term, plant as many native trees and shrubs as your yard will handle. Exhausted migrators will love you for it.