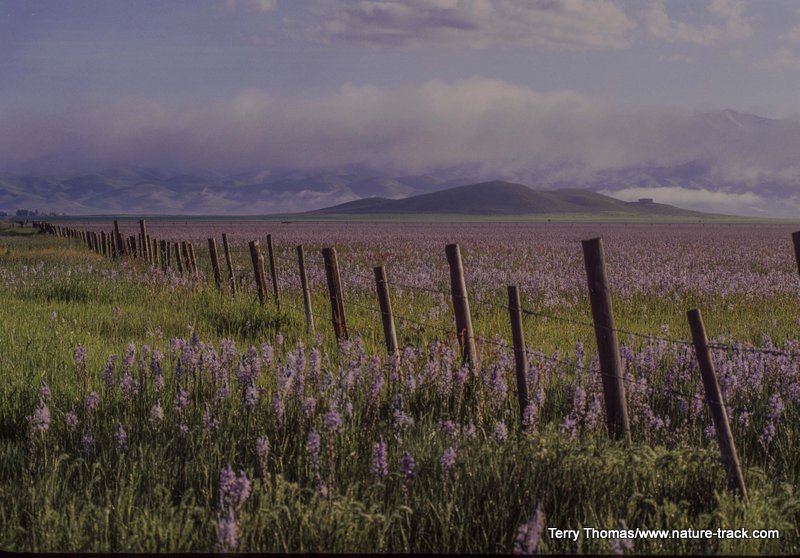 The camas bloom at Centennial Marsh should be at its annual peak from now until the end of the month.

I call it, “the back way to Boise”: Highway 20 from Idaho Falls to Arco, through Craters of the Moon to Carey, over the hump to Picabo, across the Wood River, through the Camas Prairie (this is not the Camas Prairie of north central Idaho near Grangeville) and along Magic Valley Reservoir to Fairfield and then on to unincorporated Hill City, once the sheep shipping capital of the world. Finally, you pass through some beautiful emptiness near Little Camas Reservoir before dropping south into Mountain Home and rejoining the interstate, just 40 miles from Boise.

This is a beautiful drive, especially in the spring and Camas Prairie is a highlight. The Camas Prairie is found along both sides of Highway 20. It is bounded on the south by the Bennett Hills and on the north by the Smoky Mountains. Fourteen miles west of Fairfield and south of Hill City is the Camas Prairie a.k.a. Centennial Marsh Wildlife Management Area, a wonderful place to stop when the camas flowers, which give the prairie its name, are blooming. In a good year, the ground is so blue, it seems almost like a reflection of the sky. Or, as Meriwether Lewis wrote of blooming camas in 1806, “from the colour of its bloom at a short distance it resembles lakes of fine clear water, so complete is this deseption that on first site I could have swoarn it was water.”

The camas flower attracts modern travelers because of its beauty, but there was a time when it served another purpose. Native Americans have been using this area for over 11,000 years. The root of the camas plant was a staple in their diets and stored well for winter food. Bands of Shoshoni and Bannock Indians made annual pilgrimages to harvest this critical food. This was so important to the Native American subsistence way of life that misuse of this resource by settlers (allowing hogs to graze on it) is reported to be one of the main causes of the 1878 Bannock War.

The Camas Prairie Wildlife Management Area is about 3,100 acres in size. During the spring, Camas Creek, full of snowmelt from the Smoky Mountains, overflows its banks and creates a vast shallow marsh across much of the WMA. This is perfect habitat for migrating waterfowl, shorebirds and other species. The species list is long and many can only be seen during the spring.

May is the time to visit this wonderful place. The snow is gone from this high mountain valley and the roads have pretty much dried out, making it accessible by car. Mostly though, May is when you will find the wildlife. During our short visit there last week, we saw plenty of birds, including 30+ long-billed dowitchers and several Wilson’s phalaropes, both firsts on our life lists.

May is also when the camas flowers bloom. The bloom is somewhat dependent on the snowpack in the Smoky Mountains—heavier snow years usually result in better blooms. The last 10 days of the month are usually the best.

It is 160 miles to Fairfield from Idaho Falls, no small commitment in these days of three dollar/gallon gas. If you still don’t have plans for the holiday weekend though, you might consider heading west on Highway 20, the back way to Boise. Get a burger at the Wrangler Drive-in at Fairfield and enjoy a day or two out on the Centennial Marsh watching wildlife and the mesmerizing sea of blue camas.