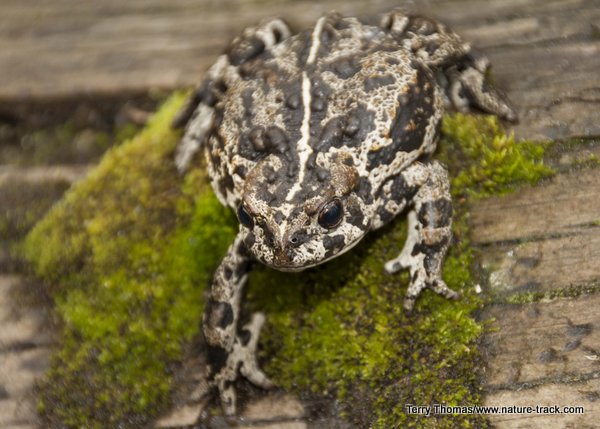 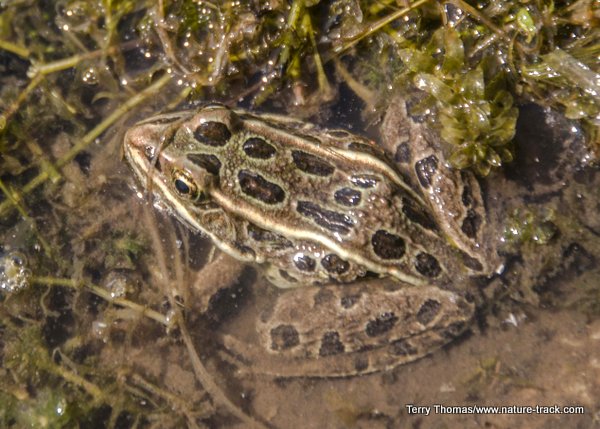 The western toad (left) and the leopard frog are cousins, but live very different lifestyles.

It started out as a single guttural low call, one that immediately had us reaching for our phones to identify it. We were birding at Patagonia Lake in southeast Arizona last week, and since we were birding, we assumed the strange noise was a bird. But as we tested bird after bird, none of them had a call that matched the sound. Bittern? Nope. Green heron? Not even close. Then we heard another and then another and soon a whole chorus and my wife exclaimed, bull frogs! We had never heard bull frogs before but determined that the makers of this strange sound, one that sounded like electrical humming late in the evening, were frogs, not birds.

Frogs and toads are probably the most ubiquitous members of the amphibian world. But what is the difference between the two? They are similar in basic configuration.  Frog is the description of a specialized animal with specific characteristics including: no discernable neck (only ten vertebrae compared to an adult human’s 24 vertebrae), a broad head and no tail as adults. They are amphibians, not reptiles, and can breathe through their skin.

Both frogs and toads go through a complete metamorphosis where they change from one lifeform to a completely different one, but their differences start here. They begin life as a fertilized egg, part of a mass of similar eggs, laid in shallow pools in a cluster (frogs) or in a long chain (toads). Frog tadpoles are usually slender and golden brown while toad tadpoles are black and plump.

As they mature into adults, more differences manifest themselves. Most noticeable might be in how they each move. Toads move relatively slowly, almost crawling on short hind legs, rarely jumping. On the other hand, frogs, with their long sleek legs, jump regularly as a form of locomotion and can sometimes leap impressive distances. In addition, frog feet are usually webbed between the toes and those of toads are not webbed.

This webbing or lack thereof also indicates a lifestyle. Frogs are highly aquatic, living in and around water all the time. Toads spend much more of their time on land where webbed feet would be a hinderance.

Just looking at a frog in one hand and a toad in the other will show you a couple of other distinct differences. First, the frog’s skin is smooth and glistening, appearing wet. That of a toad is coarse and “warty” with a dry appearance. In addition, the toad is stubby and thick, sometimes almost round in shape where a frog is often more “athletic-looking”.

But enough of the differences. Frogs and toads are members of the same family and are closely related. Scientists do not distinguish between frogs and toads taxonomically. One source I read stated that all toads are frogs, but not all frogs are toads. They went on to explain that most frogs have teeth, small to be sure, and only on the upper jaw and sometimes on the tongue and/or palate, but toads do not. That is the real distinction as there are frog and toad species that sometimes cross the other lines.

Frogs may have been on this planet for 265 million years. Whether it is the smallest frog of just one-third of an inch long, or the largest, at 13 inches and seven pounds, they are successful enough to have remained unchanged for most of that time. Sadly, over 120 species of frogs are thought to have become extinct in the past 40 years with another one third of species considered threatened with extinction. Our watch may be the one to witness the demise of one of the most successful groups of species the world has ever known.