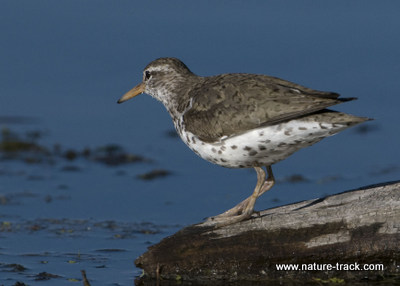 Spotted sandpipers practice a mating system known as polyandry, where the female raises more than one clutch with different mates and the male is in charge of incubation and broodrearing.

There is one fight for mating dominance I would like to witness. By all accounts, it is a bloody, eye-gouging, biting, leg-busting winner-takes-all fight. But it isn’t between huge grizzly bear boars or even male lions. It is between spotted sandpipers, a small ubiquitous shorebird.

What’s more, during this fight, the boys stand off in the corner and let the girls duke it out. Like the fabled Amazons, spotted sandpiper females, not the males, defend the territory from other females.  It gets even weirder.

Spotted sandpipers are one of a small number of species, about 1-2% of bird species, which practice polyandrous breeding. Polyandry literally means many males. The female develops a harem of adoring males, and defends them against all interlopers.

In many polyandrous animals, the female mates with a number of males in short succession, mixing sperm and having offspring from different fathers. That is how a single female dog can have a litter of puppies that don’t look the same. If she breeds with more than one male, both may be represented in the offspring.

In spotted sandpipers, polyandry has passed through some important evolutionary steps taking it to a new level. First it is important to understand why polyandry might occur. Unlike a pheasant or a quail that can lay as many as a dozen eggs and brood them in a single nest, many shorebirds have large eggs in relation to their body size. The size of the egg restricts any given nest to 3-5 eggs because that is all the bird can successfully incubate.

But what if a bird has the capacity to produce 20 or more eggs in a season? The brooding limitation would actually be a serious productivity handicap.

The handicap can be resolved by turning the incubation over to the father of that clutch and starting a second clutch with another male. That is what the spotted sandpipers do. The male assumes incubation responsibilities while the female seeks out another mate. Spotted sandpiper females have been known to start as many as four different families with four different males in a single season.

The strange part is that spotted sandpipers have done an almost complete role reversal. The females arrive first on the breeding grounds and establish and defend their territories in bloody disputes. The males form sub-territories within the female’s territory and are the primary caregivers from egg-laying until the chicks fledge. And unlike most birds, the female is larger than the male and is more visual attractive with more spotting on the white breast. The female performs the courtship rituals and females even experience a sevenfold increase in testosterone levels during breeding season.

It wouldn’t be fair to say that all spotted sandpiper females are polyandrous. Many are monogamous at least some of the time and the female might even help with incubation, especially if it is the last clutch for the year.

Either way it is the males that carry the burden for raising the kids and they really earn the title, Mr. Mom.