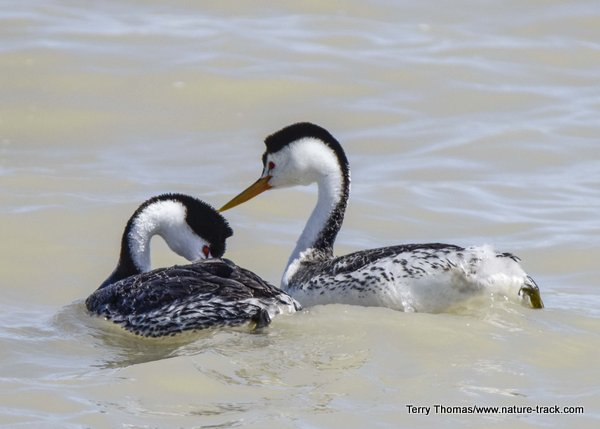 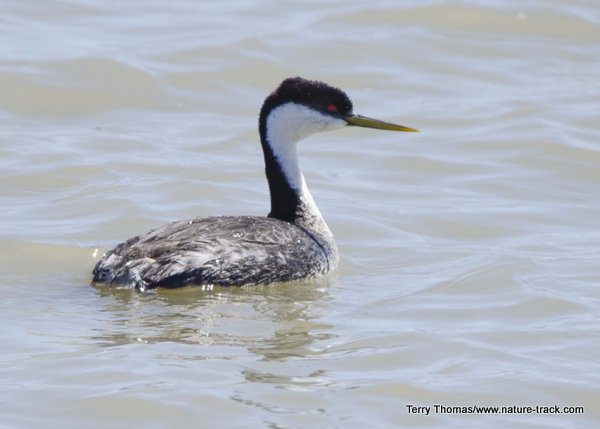 These photos of a pair of Clark’s grebes and a single western grebe clearly show the eye in the white (Clark’s) and in the black (western). The difference in bill color is also visible.

This conversation happens just about every time we see a black and white bird on water: Wife: “Well, it is definitely a grebe.” Me: “Yes, but is it a western grebe or a Clark’s grebe?” Wife, excitedly: “I think it is a Clark’s grebe!” (definitely the more thrilling find for us as we usually see 95 percent western grebes). Me: “Can you tell if the eye is in the white or in the black?” Wife: “I am sure it is in the white!” Me, less enthusiastically: “Let me get out the spotting scope just to be sure.”

Once the scope is set up, we are usually disappointed to find that the suspect bird is yet another western grebe. That changed several weeks ago at Bear River National Waterfowl Refuge near Brigham City, Utah. We actually saw a large number of Clark’s grebes, and is often the case, they were pretty easy to identify, even with binoculars, so long as we had a good profile to work with.

These two species are remarkably similar looking. Both are black on the back with a broad black stripe reaching up the back of the neck and to the bill. The underside is white including the lower half of the face and neck. And they both sport incredible red eyes. The biggest difference between the two, at least in looks, is the black on the top of the head. In the western grebe, the black extends down to just under the eye. In the Clark’s grebe, the black ends above the eye so that the eye is actually in the white portion that makes up the throat and sides of the face and neck.

I got to where I could quickly identify a Clark’s grebe even without binoculars and I wondered what I was keying on. It turned out that because the black portion on top of the head of the Clark’s grebe is thinner, it has the appearance, at least to me, of being more arched and even a bit crown-like, perhaps like a mohawk haircut. This seemed pretty obvious after watching several birds closely.

I also noticed that the Clark’s grebe has a bill that is more orange than that of a western grebe (whose bill is more yellow). However, for me, that is one of those identification features that works best when the two are close by for comparison.

These two species were one species until 1985. By then, scientists and taxonomists realized that the two species rarely interbreed even if they live in close proximity. They have substantial DNA differences and make different calls as well, justifying a split into separate species.

Behaviorally, the two species are very similar. Their amazing courtship displays are virtually identical. Western grebes, however, tend to forage closer to shore and Clark’s grebes prefer deeper water. Perhaps that is why we see so many more western than Clark’s grebes—they are nearer shore. This does lead to one behavior that can be noticeable as well: the Clark’s grebe tends to use a more upward leap when diving, possibly because it forages deeper than the western grebe.

Finally, the breeding range is almost identical for both species. These truly are birds of the West. They both breed from California to the Great Plains and southwest Canada to Mexico.

I hope that now we have had an opportunity to really see the differences between the two species, it won’t be difficult to determine one from the other. Perhaps our conversations will improve too.