Where to See Waterfalls 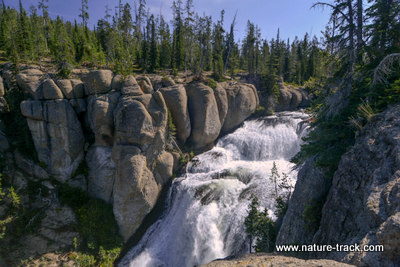 Terraced Falls in the Southwest corner of Yellowstone Park, is a relatively easily accessed waterfall.

Waterfalls in our area may not be the tallest or grandest in the world but they are still amazing. And the area surrounding eastern and southern Idaho and western Wyoming is particularly blessed with waterfalls and springtime, with the high runoff already occurring, is the time to see them.

This year, Shoshone Falls, near Twin Falls, should top everyone’s list of must-see waterfalls. It is 210 feet tall (taller than Niagara) and 900 feet wide when running full, making it one of the biggest waterfalls in the nation. As of May 3rd, it was running at 13,700 cubic feet per second or nearly 103,000 gallons per second. A week later, flow was 12,000 cubic-feet per second so the show is starting to fade. Shoshone Falls will diminish rapidly down to a comparative trickle once the irrigation season is in full swing so don’t delay this trip (there is a fee of $3 per carload).

While you are in the Twin Falls area, don’t miss seeing Thousand Springs State Park and Niagara Springs. Water that sinks into the ground in the Upper Snake region travels through an underground aquifer. It eventually erupts from its underground prison high up on the steep basalt walls of the Snake River south of Wendell. This can be a spectacular display as the water spills down the canyon walls.

The Henrys Fork of the Snake River has three significant falls as the river drops off the caldera plateau: Sheep, Upper Mesa and Lower Mesa falls. These are all spectacular and you can drive to overlooks for both Upper and Lower Mesa Falls (there is a fee at Upper Mesa Falls). Sheep Falls requires a walk off the rim from the 151 road on the north or the Sheep Falls road on the south.

The South Fork of the Snake River has two significant falls. One is the beautiful Fall Creek Falls that enters the river just 1.3 miles up the river road from the Swan Valley Bridge. You can see this falls from an overlook on top but be warned, this is a dangerous place for kids. Keep them very close. The Fall Creek Falls is best viewed from river level which will require a boat. The other falls is in Waterfall Canyon, a strenuous hike of 9.5 miles (one way) up Palisades Creek and past Upper Palisades Lake. The falls is tall and narrow and dives off the east face near the top of the canyon.

Wikipedia lists 57 waterfalls in Yellowstone National Park and admits that it is an incomplete list. Popular and easily accessible ones include Upper and Lower falls of the Yellowstone River (Lower Falls is 308 feet tall, the tallest in the park), Gibbon Falls, Lewis River Falls and Tower Falls. There are, however, many falls in the southwest corner of the park that are worth visiting.

The Bechler River system indeed has a lot of waterfalls. The easiest one to see is Bechler Falls, a quick hike up from Cave Falls on the Fall River. The other falls on the Bechler River, including Dunada (on the Boundary Creek arm), Colonnade, Iris and Albright, are increasingly difficult to get to. There is a good trail but it gets long and includes several river fords.

Fall River is aptly named. High up in the drainage is Union Falls. At 260 feet tall, it is the second highest in the park. Like Bechler River, most of these falls are only available to serious hikers. Union Falls is over ten miles one way.

However, Cave Falls is reached via a paved road. Terraced Falls is accessed by a reasonable hike from the Cascade Creek trailhead off the Ashton-Flagg Ranch Road (a.k.a. the Reclamation or Grassy Lake Road).

The last falls on Fall River is another Sheep Falls, and is actually in Idaho. Turn off the Cave Falls road onto the 124 road. When the road starts to really head downhill, I advise parking and walking the last mile to the river and falls.

Choose to visit one or commit to visit all, it doesn’t matter. Each falls you visit will inspire and impress and leave you wanting more.