Sheep of the World 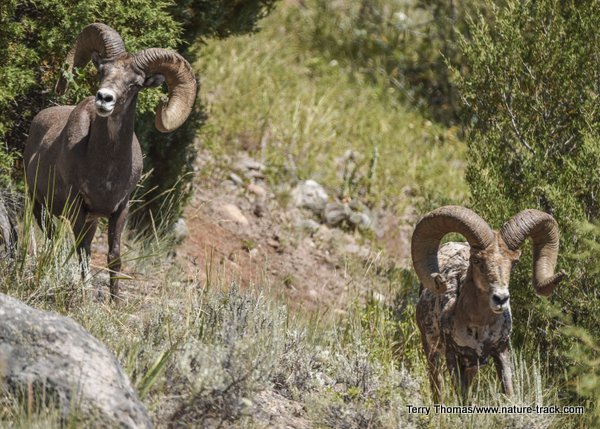 These two bighorn rams are beautiful specimens but compared to some of the other species of wild sheep, they are rather small.

I was on the edge of Yellowstone Park years ago when a group of Rocky Mountain bighorn sheep began feeding toward me. I ate my lunch and they ate theirs, gradually getting closer and closer until I could almost touch them. I had heard that bighorns sometimes behave this way but it was the first time I had seen it. Over the years hiking in Yellowstone, specifically near Specimen Mountain and on the trail to Dunraven Lookout, I have since had bighorn sheep act as if I were not there and it has always been a thrilling experience.

Last week, I saw another kind of wild sheep; desert bighorn sheep. These were in Arizona but I have also had close encounters with desert bighorns in Valley of Fire near Overton, Nevada. Last week’s sheep stood on the edge of a cliff not far above Burro Creek Campground and stared down, seemingly unconcerned, on us.

Wild sheep. In North America that means Rocky Mountain bighorn, desert bighorn, Stone sheep and Dall sheep. The latter two are found in northwest Canada and Alaska. Two sub-species, the California Rocky Mountain bighorn and the Fannin Stone sheep are also recognized. If there is a single animal that personifies wild country, it may be this group of sheep. They inhabit some of the toughest country on the continent and thrive in weather extremes from desert to arctic.

Like most animals though, they tend to live in the gentlest country that suits their needs. For instance, during the 1830’s, the foothills surrounding Pocatello were renowned for their bighorn sheep populations. This country is pretty modest when compared to, say, the Teton Range, but sheep abounded there until hunting pressure wiped them out.

Once you leave this continent, wild sheep takes on a much broader meaning.  They have exotic names like, mouflon, argali, aoudad, urial, dalmatian, Marco Polo and tur and hail from equally exotic places such as Mongolia, China, Tajikistan, Croatia, Pakistan and North Africa. And they are equally unique looking, often with long hair and curling horns that would make a bighorn ram hide in shame. A trophy Argali or a Marco Polo ram can have horn tips that spread to five feet.

To be called a wild sheep, the animal is usually of the genus, Ovis, the same genus as domestic sheep. Aoudads, also known as Barbary sheep, however, are classified as members of the genus Ammotragus. However, they are still considered one of the 12 sheep species required for an international hunting grand slam.

When I saw the desert bighorns last week, I had to make sure of what I was seeing. About 60 years ago, several sheep species, including aoudad sheep, were transplanted to Texas where they promptly escaped into the wild and spread into neighboring states including Arizona. These sheep are tough and now co-exist with desert bighorns from the driest deserts up to snowline.

I have seen Rocky Mountain bighorns, Dall sheep and desert bighorn sheep. However, if I am going to see the rest of the world’s sheep species, I am going to have to do it in zoos. These days, the mountains are too big, the travel too far and the cost too extreme to see them in nature, unless of course, I get lucky in Arizona or Texas.