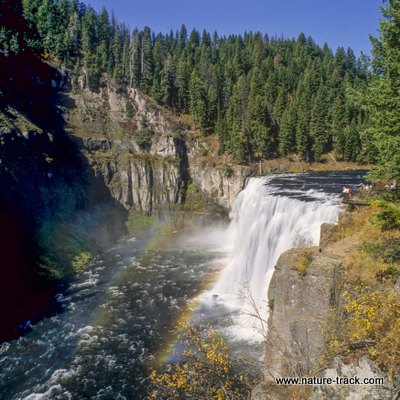 Upper Mesa Falls on the Henrys Fork inspires thousands of visitors each year with its power and beauty.

Spring sunshine is already persistently decaying the snow in the high mountain peaks. The snow becomes waterlogged, then when it can hold no more, the water runs freely over, under and through the snowpack. It gathers momentum as tiny rivulets join forces and soon streams are bursting and hundreds of waterfalls churn briefly to life. They bounce and cascade off the sides of the mountains in splendid displays waning only as the snow recedes.

There are permanent waterfalls though, ones that will run so long as there is water in the rivers and streams. Waterfalls often stir a mix of emotions. They are at once supremely powerful and unforgiving while inspiring us with their beauty.

Waterfalls start when gravity calls water from higher ground to lower ground. If humans had designed this process, water would flow in an even grade like a railroad track all the way to the valley floor and waterfalls wouldn’t exist. Nature though, is more thoughtful, creating conditions where waterfalls can form.

Many waterfalls are created simply because the falling water finds the path of least resistance down a steep mountain. Plunging off existing cliffs is just part of the game. Other waterfalls though, form when there is a hard surface, such as lava, on top, underlain by a softer material such as limestone. The durable top layer resists erosion, but once exposed, the underlying material is worn away, undercutting the top layer and forming a “cave” behind the waterfall. In these situations, the waterfall actually migrates up stream over time as the upper layer slowly erodes. For instance, Cumberland Falls in Kentucky has moved over 45 miles upstream over several million years.

We may be interested in knowing which is the largest waterfall in the world. As for height, there is no doubt that Angel Falls in Venezuela is the tallest, with a vertical plunge of 3,212 feet.

After that, things get murky fast. Just how do you measure the largest waterfall when each is so different? If total width is the criterion, then Khone Falls on the Mekong River in Laos gets top billing. It is a total of 35,376 feet wide, a figure helped out because the river splits into seven channels at this point. However, this waterfall is more of a cascade with only a 69-foot drop.

Is some combination of vertical plunge and width a better measure? If so, then Iguazú Falls on the border of Argentina and Brazil is a contender. This amazing falls is only 8,800-feet wide but plunges 269 feet. Or consider Victoria Falls, located on the Zambezi River in Zimbabwe, and often claimed as the largest waterfall in the world. It trades a bit of width for height: 5,600-feet wide with a plunge of roughly 344 feet into a gorge.

Yet another measure is which falls has the highest volume of water passing over it. In this case, Niagara Falls, separating New York and Canada, reigns supreme. Over six million cubic feet (45 million gallons) per second pass over the combined falls. Niagara also gets the most visitors, as many as eight million people each year enjoy getting doused with Niagara spray.

It doesn’t really matter though whether a waterfall is tall or short, wide or narrow or how it was formed. Each has its own charms and that is really what nullifies the saying; If you have seen one, you have seen all. There is always power and unique beauty that brings a calm to the human spirit and that alone makes them worthy of seeking out.