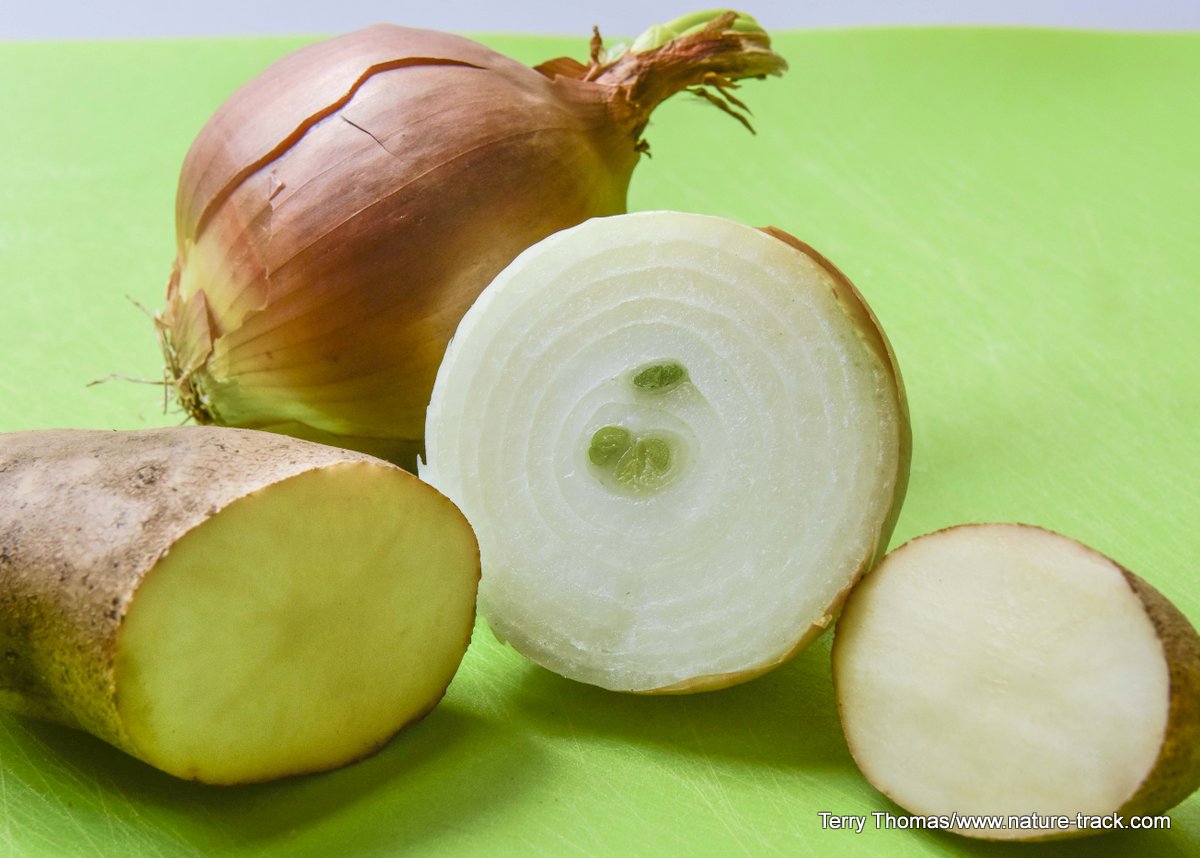 An onion is a true bulb, while a potato is a tuber. The inside of a corm has a texture more like the potato, not the onion.

Many plants use underground parts known as bulbs, corms, rhizomes or tubers to store carbohydrates for use during difficult conditions. Plants that have an underground storage organ are called geophytes. Knowing the difference between them isn’t going to change your life, but I found it interesting and thought you might also.

True bulbs are made up of modified leaves. Think of an onion. The layers are leaves. The dried “skin” on the outside of the bulb is called a tunic. At the base of a true bulb is a root pad. New bulblets form off this root pad. Sego lilies, camas, tulips, daffodils and hyacinths all form bulbs.

Corms are similar to bulbs, but if cut in cross-section, they are solid like a potato and not segmented like an onion. That is because they are stems, not leaves. They also have a tunic and a basal root plate, but a main difference is that the corm always has at least one internode with a growing point. In the right conditions, this growing point initiates a stolon, or a lateral growing stem on or just beneath the surface. This stolon has growing points from which new plants can grow. They also form small corms, called cormels, around the root pad. In some species, these cormels replace the original corm each year. There are many examples of plants that use corms as part of their survival strategy. Glacier lilies, asparagus, bananas, wapatoo (arrowhead), Chinese water chestnuts and liatris to name a few, all form corms.

Rhizomes are continuously growing—underground or on surface—lateral stems that have growth points along their surface. New shoots can start from the top of these growth points and roots sprout from the bottom. This is one strategy for growth and plants that utilize it often form dense clusters. Bamboo, asparagus (which has corms and rhizomes), bearded iris, canna lilies, cattails, mint, turmeric and ginger are all examples of plants with rhizomatous habits. Johnson grass and Bermuda grass, two invasive weeds with an intent to take over the world, will accomplish their goals using their fast-growing rhizomes.

Tubers are also underground stems, but are not at the base of the above ground portion. They are referred to as stem tubers and form from thickened rhizomes or stolons.  There is often more than one tuber per plant. Bulbs, corms, and rhizomes produce an offspring while tubers grow in size every year. However, tubers form “eyes” that can sprout and provide asexual reproduction. Tubers on the noxious weed, white byrony, a smothering vine, can become as large as basketballs. Digging out these mega tubers is the only way to kill this plant. Potatoes, yams, begonias and anemones are all examples of plants with tubers.

There is another type of tuber that forms from roots rather than stems and is called a root tuber. In order for asexual reproduction to occur, a piece of a root tuber must include part of the crown of the plant—there are no nodes, buds or growth points. If you ever wondered what the difference between yams and sweet potatoes is, now you know. Sweet potatoes, dahlias and day lilies all produce root, not stem, tubers.

Finally, while asexual reproduction is very common among geophytes, these plants still produce seed and can be started from seed. It may take three years to get a tulip to blossom stage when planted by seed, but this can be a far less costly method of getting started.

These underground “storage units” really give geophytes an edge when conditions get tough. Keeping a food reserve might be smart business for humans too.