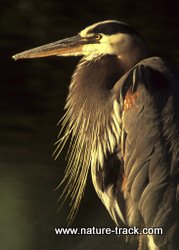 Great blue herons and others of the same family were nearly hunted to extinction to satisfy the demands of ladies’ fashion in the late 1800’s. Conservation finally carried the day though and populations rebounded under protection.

The long thin plumes of the male great blue heron flutter in the breeze like a gray pirate's beard.

He is wary of me as he searches for breakfast, but he is more than a little interested in the female nearby. The plumes, growing on his chest and head, are specifically to woo her into being his mate, and he wants to make sure she can fully appreciate them.

In a world where function trumps form, this seems like an anomaly. Unlike wing and tail feathers, these plumes, aigrettes as they are called, don't aid in flight and don't keep him warm. They are strictly for show and in the heron's world they may be the most important feathers on his body. If he cannot attract a mate, he does not breed. If he does not pass his genes on to the next generation, then ecologically he is a failure.

Aigrette is a French word meaning 'egret.' These useless yet essential feathers are the trademark of the egrets as well as herons. Egrets and herons are always beautiful, but with subtle lines and regal poses, unlike the audacious colors of a golden pheasant or the flamboyant birds of paradise.

As  the aigrettes grow in the spring, however, their beauty embraces elegance. When a male egret displays, he is no longer a bird, but a breathtaking work of living art that stirs the human heart. Birds with aigrettes are so stunning, so inspiring, that for a time, this was nearly their undoing.

In the late 1800s, women craved these feathers, using them to adorn their hats and augment their beauty and status. Egrets and herons were attached to the feathers, literally and figuratively, and giving them up meant over their dead bodies. The dead bodies piled up quickly to satisfy fashion.

With an ounce of aigrettes selling for twice the price of an ounce of gold in 1886, market hunters swarmed to the wetlands that egrets and herons call home. With traps and guns, they harvested as if the birds were a gold mine to be played out.

The slaughter fanned conservation flames and citizens decried the decimation. By the time laws were finally passed to outlaw trade in wildlife, a wildlife refuge system had been born, two of its first four game wardens had been murdered and a brand new conservation organization, The Audubon Society, had been formed.

Two things saved the egrets and the herons: People who cared more about the birds than a fleeting financial balance sheet and the enforcement of laws that protected a public resource. One hundred years later, heron and egret populations have rebounded from their tango with extinction and all are thriving for us to enjoy.

These egrets and herons, with their amazing aigrettes, are now a reminder that beauty sometimes comes at a price and being homely is sometimes a great advantage!