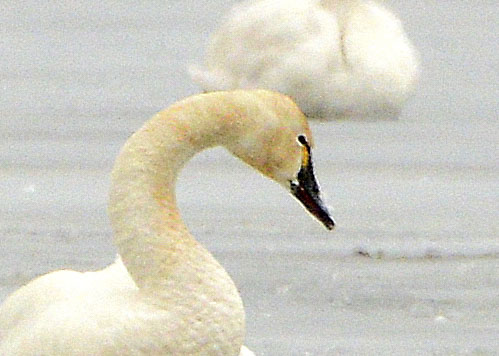 Tundra swans like these look so much like trumpeter swans you have to look closely to tell them apart if they aren’t side by side for a size comparison. This one shows the characteristic yellow marking on the bill just under the eye.  Photo courtesy Gary Myers.

Hundreds of large snow white birds floated on the blue waters of unfrozen portions of the marshes at Bear River National Wildlife Refuge near Brigham City, Utah. At the visitor center they told us to expect mostly tundra swans, yet at the distance we were looking, they appeared to be exactly like the trumpeter swans we commonly see in Eastern Idaho.

Calling would have distinguished the two species as well. The call of the much larger trumpeter is a loud and brassish, HoHO; that of the tundra swan is higher pitched and more mellow.

Finally, a couple of swans drew close enough that with binoculars we could clearly see the best diagnostic between tundra and trumpeter swans: tundra swans have yellow markings on their otherwise black upper bills and these had the marks.

The tundra swan also has one other diagnostic characteristic, one that has been acknowledged for several hundred years. On Sunday March 9th 1806, referring to the tundra swan, Meriwether Lewis noted in his journal, “from the peculiar whistleing of the note of this bird I have called it the whistleing swan.” Indeed, their wings do whistle in flight.

Although we only see them during the winter months, tundra swans are the most numerous swans in the Americas. During the summer months they spend their time raising families on the tundra of the Arctic. Huge flocks descend out of their tundra homes each fall to spend winter months wherever they can find ice-free waters. Some make round trips exceeding 3,700 miles.

Unlike trumpeter swans, tundra swans nest on the ground, not on a floating island of vegetation. Their nests are subject to predation by a wide variety of marauders and parents are ever vigilant during the nesting season. An aggressive tundra swan mpair can drive off even fox-sized predators.

Swans make flying look effortless but it is easy to imagine the difficulty of getting 15 or more pounds airborne, even on five to six foot wings. Swans will run across the water for up to 100 yards, wings beating furiously and long necks outstretched. Once in the air though, they become elegance in motion. All the effort to become airborne translates into fluid motion and there is nothing more striking than a flight of pure white swans against a winter blue sky.

Besides beauty and grace, tundra swans and trumpeter swans share another quality that makes them romantic symbols and role models for humans. It is believed that they mate for life. From the time they are two to three years old and choose a mate, they spend the rest of their lives together. For a swan, their vows are inviolate, dissolvable only upon death.