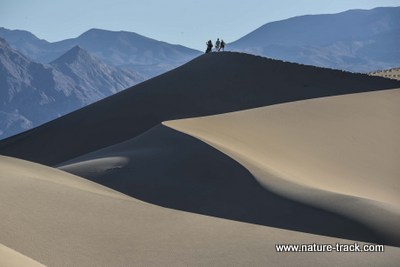 One good wind can erase all traces of human influence and restore a dune time and again.

Sand seeped through the fabric of my shoes and poured over their tops as I struggled up a steep sand dune in the pre-dawn light. A windstorm the previous day had provoked the sands into a roil high enough that I saw it from over 30 miles away. It erased all sign of humanity restoring the dunes to a primeval but ephemeral perfection.

I looked at the tracks I was making in the perfect sand. I could count almost 50 other photographers and sunrise worshipers on Mesquite Flat Dunes at Death Valley National Park so I wasn’t the only one desecrating the freshness. As the sun continued to warm and the nearby resort of Stove Pipe Wells awoke, hundreds of people would join in tracking up these perfect sands and it would take another blustery day to cleanse the dunes once again. I hoped to capture an image or two before every inch of dunes had a human track in it.

It has been surprising to find just how many sand dune complexes exist in the West. In the past several months, I have visited three national parks/monuments that contain sand dunes. We also made a quick side trip to Brunneau Sand Dunes State Park near Mountain Home, Idaho earlier this year to see the tallest single dune in the nation. And nearby St. Anthony Sand Dunes are a huge 41,000 acre complex of active dunes.

Despite having sand as a common denominator, each set of sand dunes seems to have its own character and personality. Dunes are usually significantly isolated from other dunes giving nature a chance to romp and play with species adaptations. Dunes commonly have their own unique sets of wildlife adapted to that particular complex.

Even sand isn’t the same from complex to complex. The sand at White Sands National Monument in New Mexico is brilliant white fine gypsum sand, not the quartz and feldspar of Mesquite Flat Dunes in Death Valley. The singing sands at the Killpecker Dunes of Wyoming’s Red Desert are more rounded and polished than most sand particles which is partly responsible for the singing or booming that arise from those shifting sands.

Sand is certainly highly variable. Black sand for instance could be from magnetite, a rock high in iron, basalt, obsidian or other dark material. If a rock can be weathered down into small pieces larger than silt, it can become sand.

In the interior of the country, dunes need two things to form: parent material weathered to sand sized particles and strong winds that can propel the sand from source to deposition area. Often the source is an ancient lakebed or sea and the winds scalp thin layers of primeval sediments, but the source can be just about any rock that continues to weather into smaller pieces.

Until I flew over it years ago, I was only vaguely aware that we have a national park located in southeastern Colorado named Great Sand Dunes. But when I looked out the window from 30,000 feet, I immediately recognized the dunes and was smitten by the magic of a habitat that can erase all traces of humanity and begin anew with just a few puffs of wind. Sometimes I wish it was as easy for humans to begin anew.