Feeding Birds--The Good and the Bad 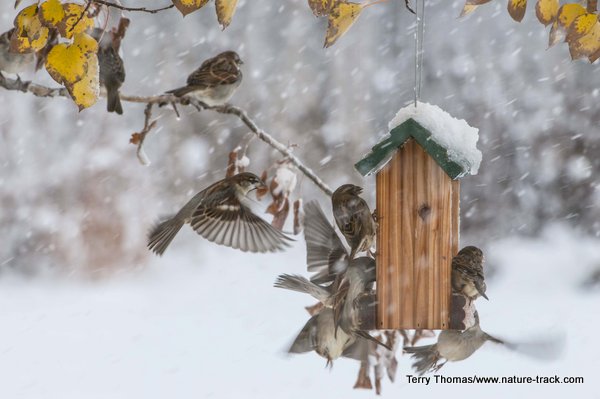 Feeding birds is a favorite global pastime in developed nations. Is it good for the birds though?

Is it a classic case of, “everyone is doing it so it must be okay”? Feeding birds is one of the most ubiquitous engagements humans have with wildlife. Over 57 million households, 40 percent of Americans (over 75 percent of Brits) feed birds. Most wildlife refuges, public or private, have feeder stations, and some famous ones, like Patagonia, Arizona’s Paton’s Hummingbird Sanctuary and Green Valley, Arizona, Madera Canyon’s Santa Rita Lodge, have dozens of feeders of many types.

There is concern though, that feeding birds can be counter-productive, doing more harm than good. I spent hours researching this topic and have come to some conclusions of my own.

First, the good aspects of bird feeding. There isn’t a lot of hard science on this topic but the handful of studies out there seem to indicate that winter feeding of birds generally increases survival, nesting success and survival of nestlings. I stress that this is winter feeding when food can be in short supply and cold temperatures increase the need for food to stoke internal fires. Feeding during summer months is unnecessary for survival in most instances.

Bird feeding is definitely good for people. Personally, I spend breakfast time enjoying the birds at my feeder. Millions of other people do so as well, providing a connection to nature even in cities and suburbs. It is also big business—Americans spend over $4 billion annually on bird seed alone.

Disease and poisoning are the scariest part of bird feeding. An outbreak of salmonella poisoning has been plaguing songbirds this year, starting on the west coast. As of last week, it had moved as far as western Idaho. Feeding stations are suspected as the main culprit in spreading this outbreak.

In the 1990’s house finches in the eastern U.S. were decimated by a disease that experts claimed was spread at feeding stations. Something similar occurred with greenfinches in Great Britain between 2006 and 2016.

Feeding has several negative human-caused elements that are easily controlled. House cats and window strikes claim millions of birds each year. This can negate the benefits of feeding very quickly. Keeping cats indoors and marking up windows so birds aren’t fooled by reflections are essential if you are going to feed.

Occasionally, feeding birds can alter their behavior to their detriment. The endangered Florida scrub jay, for instance, is a real pushover for peanuts. This rich food helps them to nest earlier than normal. That isn’t good because the chicks hatch before the caterpillars that they depend upon are available and the chicks starve.

Spanish white storks have taken so thoroughly to their landfill diets that they have forgotten to migrate. In a complex interaction, this means that sick birds aren’t subjected to the rigors of migration that would normally eliminate them from the population and they constantly expose their peers to their illnesses.

One researcher summed up feeding this way; “Feeders can bring unexpected species together and bring birds together more frequently than normal, creating ideal conditions for parasites and other contaminates.”

Putting out small amounts of seed daily rather than filling large hoppers, dedicating individual feeders for specific seed types (to help separate species), cleaning feeders weekly with a solution of 10 percent (non-chlorinated if possible) bleach, routinely cleaning up spilled seed, hulls and droppings and ensuring your feed is high quality and fresh all reduce the risk of disease and poisoning.

Humans have changed foraging opportunities so much that we may be hindering survival of some birds long-term. I see enough benefits to winter feeding of songbirds that I will continue to do so, albeit with some added precautions, just in case I can help re-establish the balance in some small way.