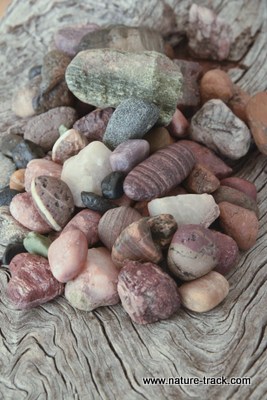 A beautiful pile of rocks like this one has character and would interest any little boy, no matter how old he is.

What started out as a quick walk for a bit of exercise turned into an hour of poking and prodding among the rocks along a fence separating the Barry M. Goldwater (Bombing) Range from Yuma, Arizona Foothills County 14 road.

My exercise pace slowed significantly as I studied the ground. It was strewn with rocks, mostly fist sized and smaller, but in a surprisingly wide variety. Like a kid, my pockets soon bulged with several pounds of large pebbles.

There were purple rocks, blood red rocks, yellow, green, pink, white and orange rocks. There was a granite-like black and white, rocks rough as sandpaper and some already polished by eons of rolling in desert sand and polished enough to resemble black jellybeans. Others were jagged; freshly broken and revealing their innards to the world. There was even a color my father called brindle brown. He actually used a colorful adjective along with that but this is a family oriented column so I will leave the descriptor to your imagination. Suffice it to say it wasn’t complimentary.

Among all the rocks mingled with the sand, I chose to fill my pockets with rocks of character. Character meant unique and surprising like sediment striping, polish, unusual shape or striking color combinations, rocks that made me stammer, “Wow, look at that one!” to no one in particular. That eliminated most rocks and turned my exercise into a hunt of sorts.

At first I tried to divine their origins: Sedimentary? Quartz? Granite? I thought it proper to assign them suitable names. I quickly gave up though. Geology is near the top of my educational bucket list but it still is in the bucket. I can only hope to learn someday, but for now it is somehow liberating to enjoy the beauty and uniqueness of each rock without attaching a moniker.

I was still puzzled by the wide variety of rocks. How could so many different looking rocks reside side by side? I tried to read the landscape for clues as to where the rocks came from. Given that I was in a human disturbed area I couldn’t readily dismiss the possibility that human meddling was the reason why the rocks were there. However, I wasn’t far from the rugged hills to the east and south and I could see dry stream courses converging on this area. I assumed that the thumb sized rocks that interested me were flood-washed chips and chunks of larger specimens high up the jagged and raw-looking canyons.

The best of these rocks and others collected randomly over the years will eventually end up in my rock tumbler. Rock polishing is an art often taken to extremes. I am not trying for the ultra-polishing so often seen where the rocks turn out looking like shiny plastic or sugar candy. For me, highly polished rocks lose their true identity and charm, becoming instead garish and tawdry. I hope to enhance and highlight their natural character, not suffocate it.

I expect that if I could fit, I would benefit from a turn in the tumbler. My own character needs more than a little refinement and polish. But until then, I am just a rough-edged and middle-aged guy who still can’t resist filling his pockets with pretty rocks.